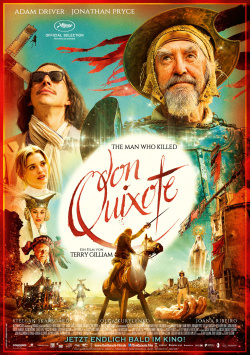 The Man Who Killed Don Quixote

Toby (Adam Driver) was once an ambitious filmmaker full of passion. Now his work is dominated only by money and commerce. During the catastrophic shooting of a commercial in Spain, Toby receives a copy of his student film from a mysterious man. When he is confronted with the pictures, he is seized by the desire to visit the small village where he shot his first film all those years ago. There he also meets the old shoemaker (Jonathan Pryce), who had played Don Quixote for him. Toby quickly has to find out that his movie has completely upset life in the village and made the old man think that he is Don Quixote. And before he knows it, Toby is in a crazy adventure at the side of "his" Don Quixote, which will lead his life in an undreamt-of direction…

In 2002, "Lost in La Mancha", one of the best documentaries ever about a film shoot in which everything that can go wrong goes wrong. The film follows Terry Gilliam in his attempt to stage "The Man Who Killed Don Quixote" - an attempt that comes to an abrupt end a few days after the filming began. But even after this cinematic failure, Gilliam never gave up on bringing his vision of the classic to the screen at some point. Again and again he made new attempts to find donors and suitable actors and again and again these attempts were doomed to failure for various reasons. The project became Gilliam's personal fight against windmills.

But now it's finally time. After the last attempt even after the completion of the movie was confronted with considerable problems and it even seemed for a short time that Gilliam wouldn't be allowed to bring the finished movie into the cinemas because of a legal dispute, "The Man Who Killed Don Quixote" finally sees the light of the movie world. Hard birth is not an expression at all. But unfortunately the finished film isn't as exciting and interesting as its turbulent genesis.

There are moments in which Gilliam's genius flashes through. But there are many things that work, like a bitter man's reckoning with the film business and a desperate attempt to squeeze together all the ideas that have accumulated over the years - no matter whether it makes sense or not. Adam Driver and Jonathan Pryce play really well, but that doesn't help much if the script puts some really confusing dialogues into their mouths. And also the picture language, otherwise always one of Gilliam's great strengths, doesn't offer anything really impressive, which can also be due to the not very high budget.

"The Man Who Killed Don Quixote" lets you always feel the vision for which Gilliam fought so hard. That's why it's really hard to say that the movie as a whole is more of a disappointment. The story is a mess, the visual realization is truly enchanting only in a few moments and the direction seems too bitter at times. And in return there can be nothing more in the end than a "worth seeing with some cutbacks". Then watch "Lost in La Mancha" again…]