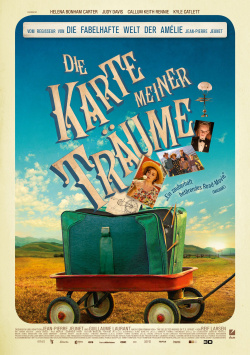 The map of my dreams

Ten-year-old T.S. Spivet (Kyle Catlett) lives with his family on a ranch in nowhere in Montana. While his sister Gracie (Niamh Wilson) dreams of living in the big city and taking part in a beauty contest, his mother Dr. Clair (Helena Bonham Carter) is primarily concerned with insects and he can't make a real connection to his taciturn father (Callum Keith Rennie), a real cowboy, T.S. can only escape into his own world. And in it the highly gifted boy makes such brilliant inventions that one day even the famous Smithsonian Museum invites him to Washington D.C. to award him a prize. The boy secretly makes his way all the way to the capital and experiences one exciting adventure after the other. But he cannot escape the dark secret that he carries around with him on his journey across the USA…

The films of Jean-Pierre Jeunet are always characterized by a very special visual language and a visual playfulness. But even the most beautiful and imaginative pictures don't make a good film. Fortunately, the French filmmaker is also a true artist as a storyteller. Jeunet knows how to make small things seem big and to discover true beauty in the dark corners of his stories. This also becomes clear in his second English language film after "Alien - The Rebirth" in an impressive and fascinating way. The film adaptation of Reif Larsen's bestseller "The Map of My Dreams", Jeunet's first 3D film, is an imaginative, humorous, sad, beautiful and wonderfully quirky road trip through the USA, which offers great cinema on both a visual and narrative level.

The film was shot mainly in Canada, where Jeunet captured some great landscape shots, which in the 3D version show a depth in which you can really lose yourself as a viewer. Apart from these beautiful pictures, the way Jeunet visualizes T.S. Spivet's very special world of thoughts makes sure that the film becomes a feast for the eyes and at the same time offers some wonderfully bizarre ideas that you can not only marvel at but also laugh at. This creates a pleasant counterweight to the very sad aspects of the story. Not only because of his passion for science, but also because of the secret that has been on his mind for far too long, T.S. is also very lonely within his family. And that also provides for very moving moments, in which some viewers could shoot tears into their eyes.

Especially the scene in which T.S. reveals his tragic secret to the world at the award ceremony in Washington is a real moment of goose bumps, thanks to the perfect interplay of Jeunet's production, the wonderful music of Denis Sanacore and the excellent play of newcomer Kyle Catlett. It is here that the film reveals another of Jeunet's strengths: as much as he may be a visual director, he never lets the images push the actor's achievements into the background. Rather, it relies on a balanced symbiosis, which also fully pays off in "The Card of My Dreams".

This wonderful film reminds us of what cinema is actually made for. Here neither the special effects nor the 3D optics are simply used to bombard the audience's senses, but they are an important part of a simply beautiful story that invites to laugh, sob and dream. So anyone who wants to experience great cinema for all the senses and loves extraordinary stories should definitely go on a trip to Washington with T.S.. Absolutely worth seeing!

Kino Trailer zum Film "The map of my dreams (Frankreich/Kanada 2013)"
Loading the player ...