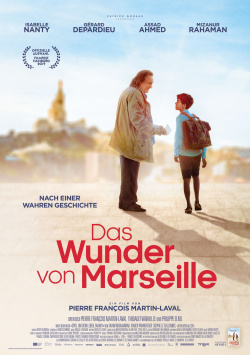 Nura (Mizanur Rahaman) is forced to leave his home Bangladesh in a hurry. He wants to apply for asylum in Paris and build a new life with his eight-year-old son Fahim (Assad Ahmed) before he can catch up with his wife and other children. But once she arrives in France, Nura is confronted with the harsh reality. Here nothing is given to one and also nobody has waited for him to offer him a job. In the coming weeks and months, the man will not be able to integrate. He does not learn the language and does not understand why he should stick to customs such as punctuality. Fahim is completely different, he quickly gets in touch and finds in the grumpy Sylvain (Gérard Depardieu) - one of the best chess trainers in France - a sponsor for his unique chess talent. When Nura threatens to be deported, it is now up to his son to save the family's existence. Because if he wins the championship in Marseille and becomes French champion, that could stop the deportation…

Director Pierre François Martin-Laval tells in "The Miracle of Marseille" a true story based on true events, which shows that you can't really be young enough to fight for your dreams. Although the filmmaker doesn't completely renounce the big emotions, he tries to record the difficult everyday life of asylum seekers in a country where they neither understand the language nor the customs in an authentic and almost sober way. Again and again he spices the whole thing up with a pinch of humor and lightness, which is very good for the film with its rather difficult subject matter.

It's nice that Martin-Laval not only pleads for humanity and helpfulness towards asylum seekers, but that he also shows how important it is to integrate oneself into a country in which one wants to live and work. Since Nura, unlike his son, does not use the months of waiting to learn French in order to be able to communicate a little, he does not even notice that his application is sabotaged by an interpreter. And since he interprets the term punctuality as laxly as in his homeland, even after several demands, he risks the future of his son as a great chess talent.

Assad Ahmed, who plays the little Fahim, is the great discovery of the film. He plays with an extreme naturalness, with which he even loosely plays an old hand like Gérard Depardieu against the wall. The boy also makes the drama really worth seeing, even though the staging is a bit too slow and at times a bit tenacious. Altogether, "Das Wunder von Marseille" is a nice little movie with a nice story, but for which you don't necessarily have to go to the cinema. But if you simply feel like a small dose of feel-good cinema, then you've got nothing wrong with buying an admission ticket. Worth seeing!