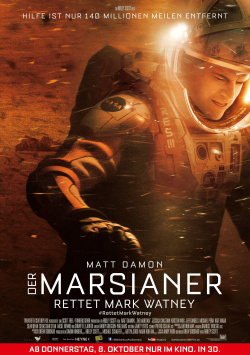 The Martian - Save Mark Watney

Finally it is done: the first humans have reached Mars in an international space mission. But during the mission there is a devastating storm on the planet and the crew has to leave Mars in a hurry. In the last second they manage to save themselves in their space shuttle and start their return journey to Earth. Only one remains: the astronaut Mark Watney (Matt Damon), who apparently died during the storm. But Watney is not dead and is now all alone on a planet where survival is actually impossible for a human being. But he doesn't give up that easily. With his expert knowledge and his will to survive, the trained botanist tries to create a makeshift home for himself until he is rescued. But for that he must first establish contact with the earth….

Director Ridley Scott has truly not only brought masterpieces to cinemas in recent years. But with "Der Marsianer - Rettet Mark Watney", a film adaptation of Andy Weir's bestseller, the creator of classics like "Alien" or "Blade Runner" once again delivers something big. The exciting story is told from three perspectives: that of Mark Watney, who fights desperately for his survival on Mars despite all resistance. From the NASA team on Earth, who are feverishly working on a rescue mission after realizing that Watney is still alive. And finally, from Watney's team who must make a difficult decision on their way to Earth to retrieve their comrade left behind. With a tightly knit dramaturgy and first-class actors, Scott weaves these three storylines into a gripping whole that makes the almost two-and-a-half hours of the film fly by.

Andy Weir attached great importance to his novel being as accurate as possible from a scientific point of view. At least in theory, everything he describes should actually be feasible. Scott also made similar demands on his film adaptation and therefore consulted several scientific advisors, among others from NASA. Apart from the great storm at the beginning of the film, which serves a purely dramaturgical purpose, Watney's survival strategies and the efforts of his rescuers are based on facts that could theoretically be applied to Mars. But anyone who now fears that "Der Marsianer - Rettet Mark Watney" is an extremely dry film full of scientific terms can be reassured. Ridley Scott and scriptwriter Drew Goddard perfectly manage to bring science and entertainment together and create a very entertaining, stirring SciFi version of "Cast Away" with "MacGyver" elements.

Watney masters his difficult fate on Mars with an amazing amount of humour, which always makes for really good laughs. These represent an effective antithesis to the successful moments of tension that repeatedly push you into the cinema chair, especially in 3D. The special effects are great and make you forget that they weren't really shot on Mars. One of the best aspects of the movie, however, is Matt Damon, who delivers a truly great performance here. If you still doubt the actor's great talent, you'll learn better here, at the latest. But also the rest of the ensemble, above all Jeff Daniels, Sean Bean and Kristen Wiig, deliver wonderful performances, which make the film also on an acting level a delight.

"Der Marsianer - Rettet Mark Watney" is entertainment cinema on a very high level. Technically brilliant, dramaturgically thrilling and acting first class, the movie actually doesn't offer any real reason for criticism. A great adventure that is simply fun and that makes the most of the cinema's possibilities. But there is a very clear one: Absolutely worth seeing!!!