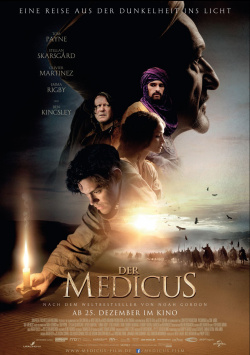 "The Medicus" by the American writer Noah Gordon is one of the most successful historical novels of the last decades. In Germany alone, the book has sold around 6 million copies since its first publication in 1987. Nevertheless, it took a quarter of a century before the world bestseller was adapted for the big screen. Under the direction of Philipp Stölzl ("Nordwand"), a German production with a large international cast was created, which not only tries to do justice to the popular original despite numerous changes, but also to reach the class of similar European works such as "Das Parfum", "Der Namen der Rose" or "Die Päpstin".

The story of the young Rob (Tom Payne), who joined a travelling healer (Stellan Skarsgard) as a child after the death of his parents, is told. Since then he has been obsessed with the desire to later become a respected healer himself. When he learns that there is a scholar named Ibn Sina (Ben Kingsley) in distant Persian Isfahan who could teach him everything he needs to know as a Medicus, Rob sets off on the long journey to the foreign country. After several strains he actually achieves his goal and even, pretending to be a Jew, manages to be accepted into the school of Ibn Sina. But there is still a long and very dangerous way to go to reach its ultimate goal, which will claim many heavy victims…

To adapt a comprehensive novel like "The Medicus" for the cinema or television, some cuts and changes are of course necessary. Even this bestseller of millions was not spared. And in fact, even without prior knowledge of the novel of the film version, it is noticeable that something is missing here and there and that the story has been tightened up at times. On the other hand, only those viewers who are familiar with the book will notice significant changes in the plot, such as the ending, the romance between Rob and Rebecca, or the character of the Bader. Whether such changes are perceived as positive, negative or rather neutral is of course a very personal feeling of each individual viewer. Objectively speaking, however, the makers have succeeded quite well in giving the film its own coherent character and at the same time conveying the essence of the book to the screen.

>The visual realization is particularly convincing. The set, costumes and the great locations in Morocco and Germany give the film a size that is absolutely right on the big screen. The dramaturgical implementation, on the other hand, cannot quite keep up. Although it is carried by very convincing actors like Ben Kingsley, a wonderful Stellan Skarsgard or also Elyas M`Barek and Fahri Yardim, the story itself is rather on the level of elaborate TV productions like "The Pillars of the Earth". That doesn't necessarily make the film bad. But apart from the pictures, the really big wow effect only wants to appear in a few scenes.

Tom Payne is really well cast as the main character. The Briton comprehensibly conveys the enormous thirst for knowledge that drives Rob to take on the long journey and the dangerous lie in order to get closer to his goal of becoming Medicus. But unfortunately the script doesn't use the potential of the character and its actor to much. Only in a few scenes is Payne allowed to show a depiction of sustainable intensity. Apart from that, it's also the supporting actors who can leave a lasting impression at the end, while Payne, like Emma Rigby, remain a little pale despite a convincing game.

However, despite all its weaknesses, "Der Medicus" is a successful adventure movie, visually opulent entertainment cinema, which even with its stately length of about two and a half hours doesn't have any really disturbing lengths and could have been a bit longer here and there (which is actually what the later TV version is supposed to be). Anyone who liked the book and productions like "The Pope" or "The Pillars of the Earth" will certainly not regret going to the cinema. Worth seeing