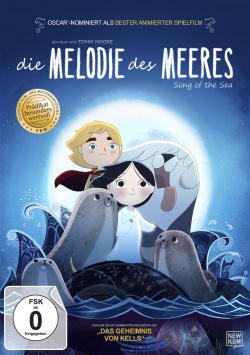 The Melody of the Sea - DVD

Film: When his mother died several years ago, a world collapsed for little Ben. The only thing he has left of his beloved mother is a shell in which he can hear the sound of the sea. Although his father tries to give him support, his grief has made him a broken man himself. And Ben's little sister Saoirse is more of a block to the boy's leg. The girl doesn't speak a word, but is always hanging on her brother's skirt everywhere. When Saoirse Ben's great treasure, the shell of her mother, is discovered, she is lured into the sea by a magical melody. Convinced that the child is in danger and that her father is unable to look after his children, her grandmother Ben and Saoirse take her to the big city. But Saoirse can't stay here. Because between her and the sea there is a magical connection. When Ben realizes this, he decides to save his sister by taking her home. And so a fantastic journey into the world of Irish legends and myths begins for the two children…

"The Melody of the Sea" by Tomm Moore ("The Secret of Kells") is a little miracle. As much as I appreciate the films of Pixar and Co. and as impressive pictures as some computer animated works offer, it is always refreshing when traditional cartoons make it into our cinemas. However, since viewing habits are now more conditioned to technical perfection, one might fear that the more simple-looking drawing technique will simply no longer work. In the first minutes of this excursion into the world of Irish myths this fear seems to be confirmed. But then something really special happens: the magical story captivates you completely and the pictures suddenly unfold an imaginative beauty like you haven't experienced in animated film in this form for a long time.

One dives into a very special world filled with a magical atmosphere and lovable characters. Moore strikes a very good balance between fairytale mysticism, drama and humour, with Ben's dog Cú and old Seanachai with his magical hair providing some amused laughs. The story itself also has some dark moments, but they are still so child-friendly that even smaller children can confidently embark on this magical journey.

"The Melody of the Sea" is a timeless masterpiece. A heart-warming fairy tale full of imaginative pictures and original ideas, immersed in a lot of Irish folklore. No wonder this animated film was nominated for an Oscar and many other important film awards. A really charming contrast program to the 3D overkill and therefore also: Absolutely worth seeing!!

Picture + sound: The technical implementation is at a very high level. The image is absolutely clean and the overall sharpness is more than satisfactory. The powerful colours and the convincing details also contribute to the overall very positive impression. The Dolby Digital 5.1 mix has some good surround effects to offer, but doesn't seem too overloaded to not overburden the small audience too much. Good.

Extras: In addition to an interesting audio commentary by director Tomm Moore, which fortunately has very helpful subtitles, the DVD also has a very brief look behind the scenes (approx. 2:42 min.), some animation tests (approx. 7:27 min.), a look at the design of the film (approx. 7:07 min.), a picture gallery, as well as the teaser and trailer for the film.

Fazit: "The Melody of the Sea" is a wonderful cartoon that tells a timelessly beautiful story in images that are simply magical in their simple beauty. The DVD transports this magical world very harmoniously into the home cinema. The bonus material especially likes the interesting audio commentary, which is thankfully presented with German subtitles. Not only for children absolutely recommendable!