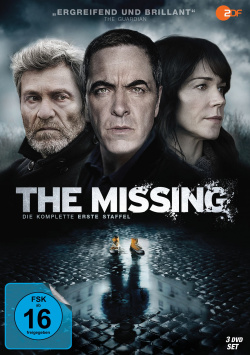 The Missing - The Complete Season 1 - DVD

Content: It was simply supposed to be a nice, relaxed family holiday that Tony (James Nesbitt) and Emily (Frances O`Connor) wanted to spend together with their son Oliver (Oliver Hunt) in a small town in northern France during the Football World Cup 2006. But then one night the five-year-old boy disappears. The police start a large-scale search operation and the renowned investigator Julien Baptiste (Tchéky Karyo) takes over the case. But all without success. Oliver stays missing. But especially Tony doesn't give up hope. He keeps looking for Oliver and desperately clings to every straw. Eight years after the disappearance of the boy, he returns to northern France as a broken man. And indeed, he and Baptiste find a new track…

The gripping story of "The Missing" is told on two plot levels that mix again and again. The first will play in 2006, the second in 2014, and gradually a shattering jigsaw puzzle will be put together that will remain stirring until the final. Like Tony, the viewer has the hope until the end that Oliver is still alive and that his parents can hold him in their arms again. Whether it will come to that, of course, will not be revealed here. Just this much: There are always moments that make you feel the despair of Tony and Emily, but then there are also moments that make you hope for a happy ending. And that's exactly what this show lives on.

It is to be highly credited to the creators that they have tried to present such a terrible scenario and the way the participants dealt with it as authentically as possible. So Emily can't forget and is always overwhelmed by sadness, but has accepted that her life has to go on. She has dared a new beginning and allows herself to feel something like joy and happiness again. That she couldn't do that at Tony's side is absolutely consistent, because he can't let go of Oliver and his grief, his anger and his self-reproaches.

Tony is an incredibly exciting character, because the desperate search for his son changes him more and more and brings out sides of him that the once so loving family father didn't show at the beginning. The scenes in which he and Julien pursue every trace, no matter how small, are always among the emotional highlights of the series. One suffers with Tony, one feels his anger and can also understand his morally not always flawless actions. In the case of this series, this attachment to a figure is particularly important for the last minutes, as these can only unfold their full power in this way.

With some cleverly constructed twists, the tension of the story is also carried over some somewhat lengthy moments. The result is an eight-part thriller that is not only excellently played, but also staged in a really thrilling way. Who likes dark crime food and for whom the topic is not too stirring can warmly recommend this first, self-contained season of "The Missing". Absolutely worth seeing!

image + sound: The coloring captures the atmosphere of the depressing story very well. The overall sharpness is on a good level, whereby only in the dark scenes there are some small deductions in the details. Overall, picture and sound quality are at a good TV level, with the Dolby Digital 5.1 mix primarily supported by the dialogues. Good.

Fazit: "The Missing" is a moving, exciting and stirring series, which lives from its relentless story and the great actors. Even if the whole thing leaves a really depressing impression, this first season is really worth seeing. The DVD box presents the eight episodes in very atmospheric picture and sound quality. The bonus material consists primarily of short promo clips, but has some interesting background information to offer. Altogether there is a clear one for this box: Absolutely recommendable!