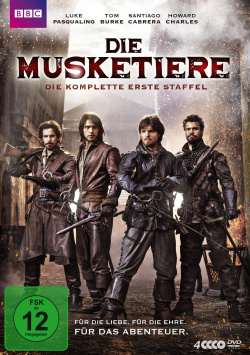 Film: When his father is murdered by a masked man pretending to be Athos, the young D'Artagnan (Luke Pasqualino) is plotting revenge. Arriving in Paris, he wants to kill the Musketeer immediately. But it soon turns out that it wasn't the real Athos (Tom Burke) who killed D'Artagnan's father and that someone is trying to incite King Louis (Ryan Gage) against his musketeers. The plan seems to work out and Athos is put in prison. Together with his cronies Aramis (Santiago Cabrera) and Portos (Howard Charles), D'Artagnan now wants to prove the innocence of the musketeer and find out who is really responsible for his father's death. All traces lead to the Red Guard of the intriguing Cardinal Richelieu (Peter Capaldi), for whom the Musketeers have long been a thorn in the side on his way to power. After the men have managed to save Athos from the gallows, D'Artagnan is accepted into the round of musketeers. In order to protect the king from attacks and intrigues and to secure peace in France, it is now time to say: All for One, One for All!

The BBC production "The Musketeers", shot in the Czech Republic, is another variant of the novels by Alexandre Dumas, which have been adapted again and again since the 1920s. After countless cinema films and TV series, in which there was even a modern variant with David Hasselhoff and Thomas Gottschalk, one could be of the opinion that no new facets can be derived from this story. But this exciting adventure series shows that this is possible after all. With a good portion of self-mockery (for example, the first episode varies the well-known motto of the Musketeers in a very amusing way), atmospheric locations, good actors (wonderful: "Doctor Who" Peter Capaldi as nasty Richelieu) and exciting stories, these Musketeers offer TV entertainment of the finest quality.

Set design, equipment and effects make 17th century France an impressive reality. Whether it's dark gases or opulent palaces, simple sheds or sophisticated gardens, the creators have done their best to draw the audience into the world of musketeers. How authentic the whole thing is doesn't matter too much. The fact is that it works perfectly on a visual level alone, so that the stories about intrigues, honour, friendship and of course love can unfold perfectly in it.

The four title heroes are a good mixture of cool heroes and likeable underdogs who always remain true to their principles. Thus, as a viewer one only too gladly follows their adventures, which at times are told with the necessary seriousness, but then again with a refreshing wink of the eye. The result is an entertaining and very entertaining adventure series that convincingly combines classic and modern elements of the genre. That'll end up loose for one: Absolutely worth seeing - we are already looking forward to season 2!

Picture + Sound: The implementation of picture and sound on the DVD is on a very good level. The image is absolutely clean and has rich colors and well balanced contrasts. The sharpness of the image makes a very good impression, especially with brighter outdoor shots. In darker scenes there are some minimal quality losses, which only have a marginal effect on the good overall impression. The sound is mainly dominated by the dialogues and the music. Every now and then, however, smaller ambient noises or sound effects also ensure that something like a real surround feeling is created. Good!

Extras: The almost one-hour bonus material on the fourth DVD is really something to be proud of. "The creation of their world" (ca. 18:31 min.) leads through the sets and lets the historical consultant of the series have his say. "Im Bootcamp" (approx. 16:07 min.) shows how the actors were trained in sword fighting, riding and stunts in the Czech Republic. "Muskets, leather, corsets and swords" (ca. 15:51 min.) illuminates the attention to detail that was put into the costumes and weapons. And "The Rescue of Constance" (ca. 11:20 min.) shows the creation of a scene and the effort put into this production. Interesting and really worth seeing!

Fazit: "The Musketeers" is an exciting and entertaining variation of the well-known story of Alexandre Dumas. Good actors, exciting stories, a good pinch of humour and thrilling action sequences make this first season a lot of fun, which can actually gain new sides from the often adapted material. The DVD presents the series in good picture and sound quality and also offers a lot of worth seeing extras. There's one for that: absolutely recommended!