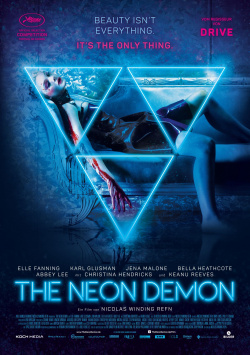 Young Jesse (Elle Fanning) comes to Los Angeles with a dream and a good portion of naivety. She wants to be a successful model, but has no idea what kind of tough bandages are used in this business. Nevertheless, it does not only manage to be accepted by a renowned agency. She also gets hold of a trial shoot with one of the city's hottest photographers. So the big break may come sooner than we thought. But Jesse's youthful carelessness, her beauty and her rapid success also brings envy with it - and every means is right for them, so that Jesse quickly disappears from the scene again…

No question, Nicolas Winding Refn is at the latest since the success of "Drive" what can generally be called a cult director. And as is so often the case with such filmmakers, there are not only loyal followers who love the very own narrative style of his films, but also viewers who can't do anything with them. I'm very divided on Nicolas Winding Refn. I liked "Drive" and also  "Pusher", also found "Walhalla Rising" fascinating in its very own way. But with "Only God Forgives" I couldn't get warm at all. On the contrary. But even though I found the film really terrible, I still think the Danes are an exciting, because actually unpredictable filmmaker, so I wanted to give his latest work "The Neon Demon" a chance.

Whoever is one of those fans for whom it is clear that Nicolas Winding Refn is a genius who can't make bad movies and for whom every shot, however meaningless it may seem, has a profound meaning, will love "The Neon Demon". All the others will probably be extremely divorced. The film has some moments when it is a very obvious satire about the model business. Here the staging reveals a bite and a maliciousness that is simply great. It's like a kind of "Black Swan" with models - only more abysmal, cynical and merciless. At these moments I am willing to attribute a certain genius to the film. But then there are the endless moments of sequences that look good, but don't make any real sense. The story becomes more and more an episodic collage that is neither fascinating nor particularly entertaining.

A necrophilia scene, which is of course art and therefore justifies a surprisingly low FSK release, is then the climax of senselessness. Surely you can interpret a lot into this scene. Probably entire treatises could be written about these five minutes. But there is also the impression that this scene, which was supposedly not in the script, was only staged in such a way that it was overstretched and incorporated into the finished film in order to shock. It may be that there are viewers who can recognize something poetic, something revealing or something cinematically brilliant in this scene. But it is just as justified to regard this sequence as sick and tasteless - and I personally tend towards the latter.

But probably this is exactly what Nicolas Winding Refn wants to achieve with his films. He doesn't want to please everyone at all, he wants to provoke, polarize and cause violent reactions - no matter whether this is enthusiasm or rather clear rejection. And he has definitely succeeded in doing so again here. I am happy for everyone who can see something special in a film like this, who is fascinated by this very special way of staging and is deeply impressed by it. But such viewers shouldn't automatically assume that anyone who doesn't share this opinion simply didn't understand the film. Unfortunately, you hear this argument very often, especially with filmmakers like Nicolas Winding Refn. You should never forget: Tastes are different. And this is revealed much more clearly in such films than in adapted mainstream goods. But for this it's quite clear: Only for fans of the director, who also found "Only God Forgives" ingenious, absolutely worth seeing. For all others rather conditionally recommendable!