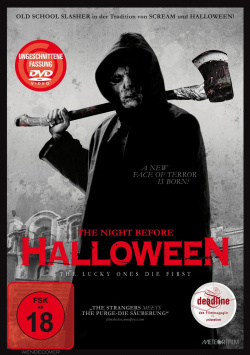 The Night before Halloween - DVD

Contents: Emily Watson (Noell Coet) can't see anything since a tragic car accident in which her mother died. Even if her therapist (Ally Walker) is convinced that Emily's figurativeness is only an emotional trauma and has no medical reasons, the world around the young woman remains dark. Her father (Daniel Hugh Kelley) looks after her self-sacrificingly, but has completely lost sight of his own happiness. So it's natural for Emily to stay home alone the night before Halloween, while her father goes on his first date in nine years. But as soon as her father leaves the house, Emily hears strange noises. And it quickly becomes clear: she is not alone...

For his latest film "The Night before Halloween" director Richard Schenkman has quite obviously made use of various representatives of the horror and thriller genre. The opening sequence is very reminiscent of "Scream", there is a very clear allusion to "Halloween", the story about blind Emily brings back memories of "Wait until dark" and the intruder(s) in her house could also be from home invasion thrillers like "The Strangers". Schenkman does not really allow its own ideas to flow into the process. Nevertheless, the final result is really something to be proud of with a few small compromises.

The Night before Halloween is a very effective Old School Slasher in many moments, which can always maintain a pleasantly high level of tension and has some good goose bumps to offer. There are only two aspects on which points need to be clearly deducted. On the one hand, the film is not necessarily a revelation from an acting point of view. While some actors deliver absolutely solid performances, others seem extremely wooden. Leading actress Noell Coet is very anxious not to belong to the second category. But especially towards the finale, she unfortunately succeeds less and less.

However, in the end Slasher movies are only rarely characterized by high acting skills. Much more serious is the fact that the viewer is not offered a real resolution. Without revealing too much at this point, it should be said that over 90% of all viewers will probably comment on the credits with a "and what should that be now? Surely over long distances it is absolutely conducive to tension that you don't know who sneaked into the Watsons' house for what reason. But even if there's no motivation at the end, it's not exciting anymore, it's just frustrating.

However, even if you have the feeling that Schenkman just ran out of ideas at the end and the positive overall impression is noticeably diminished by the rather weak script, "The Night before Halloween" is well worth seeing. Because atmospherically the whole thing works out really well and over long stretches the movie offers enough well done aspects to be able to entertain well despite its weaknesses. Nevertheless, the disappointment that good potential has been given away for no reason remains in the end. However, if you don't attach much importance to originality and can overlook the shortcoming of a missing resolution, this DVD can be recommended to you. Worth seeing!

Picture + sound: The very clean picture of the DVD is mostly kept in rather dark tones. The sharpness of the picture is on a good level, but in the detail display there are some small recognizable weak points in the many dark scenes here and there. The sound gets going a bit towards the end, otherwise the sound remains rather reserved. But since this corresponds to the atmosphere of the film, there's a good one for picture and sound: Good!

Extras: Besides the trailer, the DVD has a good making of (about 11:20 min.), which starts with a commendable warning from the director that there's a lot of spoiling for those who haven't seen the film yet. Gut!

Fazit: "The Night before Halloween" last many different influences, from "Scream" to "Wait until dark" to home invasion thrillers like "The Strangers". The result is a quite exciting Old School Slasher, which has some very effective moments of tension, but also some dramaturgical weaknesses. If you can overlook the somewhat unsatisfactory ending and just look for classic genre entertainment, you can confidently access this technically well done DVD. Recommended!