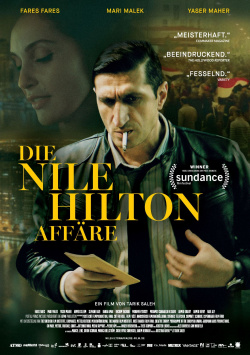 Cairo 2011: The police here are riddled with corruption. Noredin (Fares Fares) is also one of the officials who look the other way for payment in illegal machinations or offer special protection. When in a luxury suite of the Nile Hilton Hotel a famous singer is murdered and the traces lead to one of the most powerful businessmen of the country, the whole thing is to be put on record as suicide. But even if Noredin doesn't always take justice very seriously, he investigates on his own, after the seductive Gina (Hania Amar) provides him with important clues. While the protests in the city around Tharir Square are getting bigger and bigger and politicians and police are holding their breath, Noredin is diving deeper and deeper into a web of conspiracies, corruption and violence…

Director Tarik Saleh, a Swede with Egyptian roots, has tried to link a political thriller with the events surrounding "Arab Spring" in "The Nile Hilton Affair". The story itself is based on true events, which, of course, have changed dramatically for the film. The focus is on a policeman who at first glance doesn't seem to be a good person. He's corrupt and using his position wherever he can. But the longer one follows him through the story, the clearer it becomes that he, after the death of his wife emotionally dulled, has actually only adapted to a thoroughly corrupt system.

His investigations into the murder of the young singer have been carried out in an exciting way. When it becomes clear which circles the whole thing draws and who is all involved in the machinations, it is quite gripping to see. The fact that the political situation in the country is also getting worse and worse, which the viewer only notices on the sidelines, makes for a very special atmosphere. And the leading actor Fares Fares plays really great. And yet: the film just doesn't really want to ignite.

In the end the impression remains that the story and its true backgrounds could have been much more exciting. There are some scenes that aren't worked out well enough to be understood by the viewer. This leads to the fact that the story is a bit rippling at some not unimportant moments. The whole thing lacks an emotional element that contributes to the fact that even in such weaker moments one can still invest enough interest to remain tied up until the end. "The Nile Hilton Affair" is good, in some sequences even very good. But the thriller doesn't offer any real added value compared to the many high-calibre TV thrillers from the far north. And that's why the bottom line for buying a cinema ticket is only one: Recommended with some deductions!