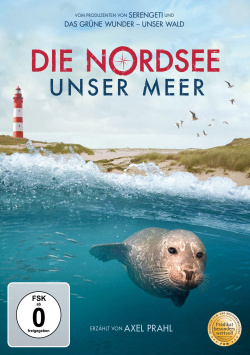 Film: The flood of documentaries that want to bring nature, land and animals closer to the viewer simply doesn't stop. Recently they showed us "Germany from above", took the audience on a dream journey through "Bavaria" or introduced nature lovers to "Our Forest". The newest journey leads interested one to the North Sea . With tour guide Axel Prahl, who comments the fascinating pictures with nordic calmness, Jrn Röver and its team show in impressive kind, how versatile the habitat North Sea is in Germany, Denmark, Norway, Scotland, England and the Netherlands.

On more than 2,000 turning days at over 60 turning locations over and under water great photographs with most modern HD cameras were caught. Whales, fighting seals, bass gannets breeding on the red rocks of Helgoland, the species-rich habitat of the Wadden Sea, ice sharks, sea cats or even the incredible power of the waves reveal themselves to the viewer in truly fascinating images. That is sometimes surprising or amusing, astonishes or invites you to dream. The commentary by Axel Prahl is not only informative, but in some moments with wonderfully dry humor it also makes for a really good mood.

The creators deserve credit for trying to offer their viewers something new, introducing them to rather unknown sea creatures and presenting them with amazing facts, which most people may not have been familiar with so far. Nevertheless, the film ultimately suffers from the fact that there were simply too many similar works in the recent past. A lot of things from documentaries like "The North Sea from Above", "The Coasts of the North" or "Germany's Coasts - The North Sea" already seem familiar. Surely a film about the North Sea can't do without the cliffs of Helgoland, but such motifs are already quite overused in the documentary film area to be able to really inspire.

Nevertheless: even if numerous scenes leave the impression that you've seen them before, in the end the positive moments, the breathtaking shots and the simply beautiful pictures with which "The North Sea" can come up almost every second predominate. The film is a 90-minute short break to the sea, an entertaining lesson about the very vulnerable, fascinating ecosystem and an excellent example of the talent and dedication of the documentary filmmakers involved. All these good reasons that make the film absolutely worth seeing not only for interested viewers in the far north!

Picture + sound: The audiovisual realization of the DVD is to be noted that the makers have worked with very good equipment here. The image is absolutely clean, the sharpness is also at a very high level in the close-ups and the colouring is very authentic and powerful. Also the Dolby Digital 5.1 Mix captures the atmosphere at the North Sea very well. Axel Prahl's narrative voice is very powerful and centrally mixed, while the actual ambient sounds are very lively. Good!

Extras: As a bonus the DVD has a short but worth seeing Making of (approx. 12 min.), as well as interviews with the speaker Axel Prahl (approx. 4 min.), the producer Britta Kiesewetter and the editor Klaus Müller (approx. 5:20 min.). The trailer for the film as well as a quite extensive, informative booklet are also offered to the buyer.

Fazit: "The North Sea" is a very nice documentary, which offers little really new to viewers who have already seen comparable works such as "The North Sea from above" or "Germany's coasts - The North Sea". However, the great pictures and the sometimes wonderfully Nordic-dry commentary by Axel Prahl are enough to give the viewer a 90-minute short break to the North Sea. And just for that there is a clear one for the technically well realized DVD: Recommendable!