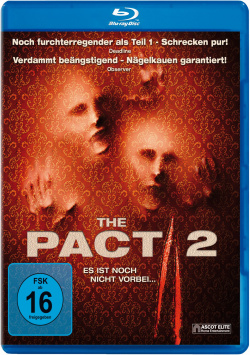 Film: After Annie Barlow (Caity Lotz) killed the bloodthirsty Judas killer Charles Barlow (Mark Steger), the danger seems to be averted. But then it comes to another murder case, which clearly bears the handwriting of the Judas killer. The grumpy FBI agent Ballard (Patrick Fischler) is convinced that it is a copycat killer. His investigations lead him to crime scene cleaner June Abbott (Camilla Luddington), who appears to be the daughter of Jenny Glick, the first victim of the Judas killer. When June learns of this, she begins to understand the visions that have been haunting her for a few days. She sets about uncovering the mystery of her past, unaware that she is more closely connected with the cruel murders than previously thought...

After his short film "The Pact" was enthusiastically received at the Sundance Film Festival in 2011, director Nicholas McCarthy directed a feature version of the horror thriller just one year later. The mixture of ghost story and mystery thriller didn't necessarily score with originality, but especially in the first half of the movie it did score with some very decent creepy moments. The home cinema exploitation of the film was then successful enough to give the green light for a continuation. McCarthy isn't on board anymore, but there are some actors from the first movie.

For "The Pact 2" Dallas Richard Hallam and Patrick Horvath took over the direction and the script. From the story around Jenny Glick, which is hinted at in the first film, they have woven a sequel that stylistically closely adheres to McCarthy's first work. It's quite obvious that they had to work with a very small budget. But visually the result is quite respectable. Especially in the scenes in which June is plagued by uncanny visions and has the feeling that someone - or something - is in her house, are pleasantly effectively staged.

However, what the film lacks is a proper script. While the story is still structured quite convincingly in the first third, it becomes more and more confusing later on, until it culminates in a very unsatisfactory resolution. The fact that this was then attached to an unnecessary cliffhanger doesn't make things any better. Also, the very clichéd drawn characters and the sometimes very flat dialogues don't necessarily contribute to a positive overall impression. The actors, first of all a wonderfully overdrawn mean Patrick Fischler and the attractive Camilla Luddington ("Californication") can only save a little despite a very hard game.

No question, "The Pact 2" has good moments and is also absolutely passable as a B-movie. But it's a pity that the makers didn't get out of the actually good basic idea for the sequel at the end and gave away a lot of tension potential through unnecessary lengths and a disappointing turn towards the end. For viewers who liked the first part, this continuation of the story is nevertheless not uninteresting, especially as one also learns what happened to Annie and Stevie. So if you don't expect more than a solid mystery horror with some small lengths, you can risk a look!

image + sound: The image is quite dark in some scenes, but also shows a good overall sharpness. Even though the small budget is also reflected in the visual implementation, the atmospheric colouring and the successful detail presentation leave a positive overall impression. The same applies to the DTS-HD Master Audio Mix, which offers some effective surround moments in addition to the powerfully mixed voices. Good!

Fazit: "The Pact 2" continues the story and style of its predecessor. This brings with it some well done moments of tension and also some well done goose skin effects. But as in part 1, the sequel also has to struggle with a number of lengths, which repeatedly pull down the tension level. Nevertheless: anyone who liked part 1 should definitely take a look here. The Blu-ray is technically well implemented and the making of bonus material leaves a good impression. All in all, despite some weaknesses this is enough for more than a solid one: recommendable!