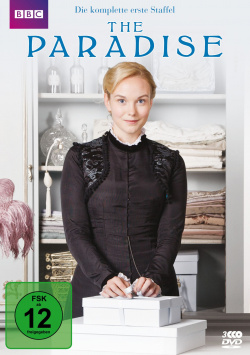 Film: In Late 19th Century Victorian England At the end of the 19th century, the young Denise Lovett (Jonna Vanderham) came from the countryside to the city to work in her uncle Edmund's (Peter Wight's) textile shop. But since the department store "The Paradise" opened directly opposite, the shops of the small retailers have been going very badly. Too bad for Uncle Edmund to pay his niece. In order to be able to afford life in the city, Denise takes a job as a saleswoman in the "Paradise" of all places, whereby her naïve appearance and enthusiasm quickly win the attention of widower John Moray (Emun Elliott), the owner of the department store, but also the suspicion of her superiors Miss Audrey (Sarah Lancashire) and her colleague Clara (Sonya Cassidy). But although Clara doesn't miss any opportunity to sabotage Denise and make her look bad, the young woman soon becomes the customers' and Moray's darling. But this could lead to enormous complications, as he is actually promised to the wealthy Katherine Glendenning (Elaine Cassidy), the daughter of Moray's financier Lord Glendenning (Patrick Malahide)...

"The Paradise" is a loose adaptation of the novel "The Paradise of the Ladies" by the Frenchman Émile Zola. Series creator Bill Gallagher ("From Lark Rise to Candleford") has moved the action from Paris to the north of England, focusing on the romance between Landei Denise and businessman John Mora. Correct social or consumer criticism, which is quite recognizable in Zola's novel, takes place only marginally here, but nevertheless works very well. Because the expulsion of smaller retail shops by large consumer temples and department store chains is a topic that is unfortunately still very topical and has an enormous influence on the changes in the appearance of larger and smaller cities.

However, it is primarily about love between people from different social and societal backgrounds, about the dreams of a simple young woman and the passions of well-heeled ladies. And Gallagher and his team have implemented this very captivatingly. Equipment, set design and costumes are simply wonderful and also the actors are outstandingly selected. Especially Joanna Vanderham, who was last seen in the drama "Das kleine Glück der großen Dinge", is almost the ideal cast as a slightly naïve, but extremely enthusiastic innocence from the country. But also Sarah Lancashire as the resolute and slightly grim Miss Audrey or Elaine Cassidy as the somewhat stuck-up and spoiled Katherine Glendenning testify to the good little hand that was proved here at the casting. Even though the level of a production like the multiple award-winning "Downton Abbey" isn't reached, fans of such series still get their money's worth. Love, intrigues, hard fates and beautiful costumes make the eight episodes of this first season fly by. Those who like emotional BBC productions of this kind should definitely go on a shopping tour in the "Paradise". Absolutely worth seeing!

Picture + sound: The fact that some scenes seem to be slightly overexposed due to direct backlighting is part of the visual style of the series and should therefore not be seen as a weakness of the picture quality of the DVD. It can convince with a very atmospheric color scheme and a very good overall sharpness for a TV series. The sound remains rather reserved for a production of this genre, but presents a convincing mixture of dialogues, music and ambient noises, which together form a harmonious sound backdrop. Good!

Extras: As a bonus the DVD on the third disc has a worth seeing Making of (approx. 30 min.) to offer, in which not only the shooting and the actors, but particularly also the set, the equipment and the costumes are dealt with. Good!

Fazit: "The Paradise" is a very nice series for all lovers of high-quality costume soaps. Love, intrigues, difficult fates and beautiful costumes make the eight episodes of this free adaptation of Émile Zola's novel "The Ladies' Paradise" fly by. Although there's a very finished end to the series and the whole thing would have worked very well as a finished mini-series, the joy that the BBC has commissioned a second season is likely to be very great for most viewers. Therefore, we can already look forward to strolling through the corridors of Paradise again soon and to being able to share in the fate of our employees and customers. absolutely recommended!