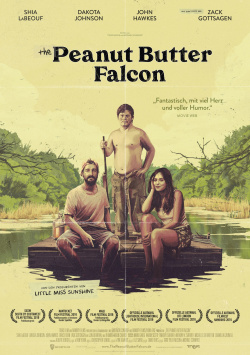 Although he is only 22 years old, Zak (Zack Gottsagen) already lives in a nursing home. He was shipped here because of his Down syndrome. But Zak dreams of leading a normal life and a career as a professional wrestler. So far every escape attempt has failed, not least because Zak's guardian Eleanor (Dakota Johnson) always keeps an eye on him. But one night the young man actually manages to sneak off the premises unnoticed. On his way to his great wrestling idol Salt Water Redneck (Thomas Haden Church) Zak meets Tyler (Shia LaBeouf), who is fleeing from a group of vengeful fishermen himself. Although Tyler is more of a loner, he allows Zak to accompany him. And soon the unequal men become real friends, but their journey together seems to have ended abruptly when Eleanor catches up with them…

".The Peanut Butter Falcon", the directorial debut of the duo Tyler Nilson and Michael Schwartz, takes the audience on a journey full of humour and poetry, immersed in wonderful pictures and carried by great actors. First and foremost Zack Gottsagen, who makes his cinema debut with this film. Tyler Nilson met the young man a few years ago at a workshop for actors with disabilities. Gottsagen's charisma and self-confidence impressed him so much that, together with Michael Schwartz, he wrote the story of the wrestling fan Zak for him.

With subtle humour and far from any clichés, a moving film about friendship was created, a stirring and entertaining plea for the power of dreams and the freedom of all people. With their sensitive hands, the filmmakers manage not to concentrate exclusively on Zak, but also to draw the other characters in an interesting way. This starts with the small thug Tyler, who is embodied by Shia LaBeaouf in a rough but somehow very sympathetic way. But also Eleanor or the former wrestler Salt Water Redneck - two characters who could have been easily decayed to changing clichés - may reveal a pleasant complexity.

"The Peanut Butter Falcon" is one of those American indie pearls that immediately warms your heart and makes you feel comfortable. A film that shows us how important it is to dream and that when we open our hearts, something wonderful can come of it. And that's exactly why there is a big one for this little movie: Absolutely worth seeing!