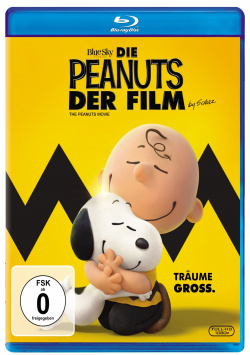 The Peanuts - The Movie - Blu-ray

Film: Charlie Brown and his friends get their own movie: More than 65 years after their comic debut the Peanuts made it onto the big screen. And here, too, everything has remained the same: Charlie Brown is still the klutz who steps from one fat person to the next. The attempt to fly a kite alone ends in chaos. Charlie Brown is just a loser to everyone, a big laughing stock. But then a new girl moves into the house across the street and comes into her class. For Charlie Brown the perfect chance to finally show someone a whole new, sovereign side. But no matter how hard he tries, he just doesn't have the courage to talk to the girl. Even the support of his faithful dog Snoopy doesn't help. But then Charlie Brown suddenly becomes the hero of the school due to a misunderstanding. Could he win the heart of his new classmate?

"The Peanuts - The Movie" tries something extremely risky. Director Steve Martino and his team have set themselves the task of transferring the spirit of the old comic strips and TV cartoons to the big screen. The original charm of the Peanuts was to be retained despite the use of state-of-the-art computer animation and 3D optics. This was no easy task, as the spirit of the times and viewing habits have changed significantly in recent decades. The more carried pace of the cartoon specials, the very simple cartoon style and the somewhat subversive humor of the comics, all this doesn't necessarily correspond to the ingredients of today's family blockbusters. And so it was to be feared that even the peanuts would fall victim to an exaggerated modernization and would be trimmed to cool at all costs.

But fortunately this is not the case. Apart from the unfortunately unavoidable dance sequence at the end of the movie, which you get in almost every animated movie, as well as some popular 3D coaster effects, the 2015 Peanuts are exactly the ones you got to know and love in the comics and earlier cartoon episodes. Charlie Brown is still the typical underdog that Lucy keeps pulling the ball away from when he wants to kick it. Linus still has his cuddly blanket, Pig Pen is still surrounded by a cloud of dirt, Schroeder loves Beethoven as always and Marcie still calls Peppermint Patty "Sir". And then, of course, there is Snoopy, who likes to lie on his doghouse and not in it, who is friends with the little yellow bird Woodstock and in his fantasy always fights against the Red Baron during the First World War.

Adults do not occur in the 2015 version of the peanuts either. When you do, you only see their legs and hear the well-known "Wah-Wah-Wah" instead of their voices. It is pleasant that the makers have consistently adhered to these well-known motifs, even though they run the risk that smaller children in particular will not understand all the jokes and allusions. It was apparently very important to them to appreciate the legacy of Charles M. Schulz in exactly the way that Snoopy and his friends deserved. This can sometimes seem a bit boring for very young cinema-goers. But all in all, "The Peanuts - The Film" is perfect family entertainment that children and adults alike can enjoy.

All in all "The Peanuts - The Film" is an entertaining animation pleasure with a lot of charm, wit and a very nice story, whose morals fortunately are not beaten with a sledgehammer on the audience. An all around successful cinema debut of the cult figures and therefore also: Absolutely worth seeing!

Picture + sound: Even in the 2D version, the Blu-ray image has a pleasant depth and a very high overall sharpness. Even the smallest details come into their own. The colours are mixed very powerfully and also the contrasts are excellently co-ordinated. Like the picture, the sound in DTS 5.1 also leaves an overall positive impression. A successful three-dimensionality, many harmoniously mixed sound effects and the clearly understandable voices of Charlie Brown and Co. provide a first-class sound carpet. Very good.

Extras: The Blu-ray offers some very nice extras besides the movie. You can see seven Snoopy mini-clips (ca. 2:45 min.), a feature about Snoopy's family, which can be seen in a short scene at the end of the movie (ca. 1:55 min.), instructions for drawing Snoopy (ca. 4:13 min.), Woodstock (ca. 3:04 min.) and Charlie Brown (ca. 4:02 min.), as well as music videos, a look behind the music video of Meghan Trainor (ca. 2:53 min.), Snoopy's jukebox, trailer and a picture gallery. But the core of the bonus material is a three-part, very nice Making of Documentary (ca. 30:17 min.), which not only traces the making of the film, but also deals with the origins of the Peanuts and their meaning for pop culture. Absolutely worth seeing!

Fazit: "The Peanuts - The Film" an entertaining animation pleasure with a lot of charm, wit and a very nice story. Director Steve Martino and his team have managed very well to capture the original spirit of the popular original and still produce a film that can appeal to today's audience. The 2D Blu-ray presents the film in very good picture and sound quality and has an extremely worth seeing making of to offer in the extras. But there is a clear one: Absolutely recommendable!