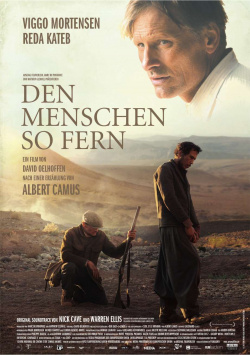 The people so far away

The Algerian Atlas Mountains in 1954: Here Daru (Viggo Mortensen) lives completely withdrawn. He works with passion during the day as a teacher to give the children from the area a perspective for the future. But the situation in the valley becomes more and more tense and at any moment a bloody rebellion threatens to break out, which the military tries to nip in the bud. Nevertheless, Daru manages to lead a quiet life until one day he gets the order to escort the murdered farmer Mohamed (Reda Kateb) to the next police station. Actually, the silent loner does not want to be drawn into this thing. But when his house is attacked by an angry lynch mob, he realizes that it takes humanity to lead the stranger to his trial. And so the two of them embark on the impassable journey that could claim their lives, or give them an unexpected freedom...

"Den Menschen so fern" is loosely based on the novella "Der Gast" by Albert Camus. With the help of the French teacher and the Arab, whom he is to bring to prison through the mountains, director David Oelhoffen tells not only a gripping story about a country shortly before the outbreak of a bloody war of independence. On the contrary, the whole thing can very well be understood as a parable of the currently so dramatic refugee problem and of the worldwide conflicts between different cultures and religious communities. At first glance Daru and Mohamed embody two very different worlds. Not only humanly, they are completely alien to each other. But the way through the mountains, which becomes more and more a fight for survival, forces the two of them to approach each other. And they notice that besides all the differences there are also many similarities.

The film can therefore be understood as a plea for the mutual approach of different cultures. Although this message is quite clear, it is fortunately not conveyed in a masterly manner. Rather the restraint dominates in almost all aspects with this Western. In the tempo, the dialogues and the dramaturgy, Oelhoffen limits himself to the essential. The whole thing is carried by two great main actors, who understand it well, even without expressing many words enough, that you as a viewer will be carried away by it. In addition, the film relies on a very engaging, wonderful visual language, which is intensified by the almost elegiac music of Nick Cave and Warren Ellis.

"Den Menschen so fern" is certainly not a film for the masses. If you are looking for pure entertainment cinema, you will be overwhelmed by the speed of the story alone. But who appreciates strong stories, fascinating pictures and first-class acting cinema and generally prefers food outside the mainstream should not miss this intelligent, profound and deeply human film! Absolutely worth seeing!

Kino Trailer zum Film "The people so far away (Frankreich 2015)"
Loading the player ...