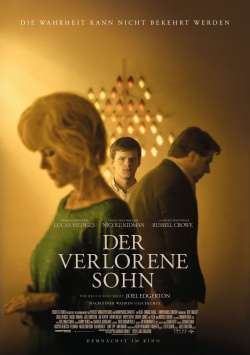 19-year-old Jared (Lucas Hedges) grows up in a strictly believing environment. His father (Russel Crowe) is a respected Baptist preacher, whose rigid views are also loyal to Jared's mother (Nicole Kidman). When his parents learn of his homosexuality, the boy has a choice: he can break with his family forever, or undergo reparative therapy. Out of love for his parents, Jared agrees to the questionable treatment. His mother accompanies him to the institution where a self-appointed therapist (Joel Edgerton) wants to "heal" young people from their homosexuality and lead them back to the path of faith. The methods he uses are often degrading and inhuman. Soon Jared wonders if he's really ready to go this way and deny his true self…

"The Prodigal Son" is based on the memoirs of Garrard Conley, who writes in it about his experiences in the institution "Love in Action". In it, he not only describes the more than questionable methods of the twelve-step program, but also exposes a bigotry that simply makes people angry. Love is such a wonderful and important thing, we can't really have enough of it. People who love should be celebrated, not oppressed, no matter who they love. But the fact that a certain form of love is met with hatred, humiliation and psychological violence can only make you angry.

Joel Edgerton, who is not only the director of the film, but has also assumed the difficult role of the fanatical therapist, has adapted the experiences of the young man in close coordination with Conley and his family and turned them into a gripping drama, which is a bit thick towards the end. However, this flaw is compensated by some very stirring scenes and the great actors. While Russel Crowe remains pale in his rather small role, Edgerton, Nicole Kidman and Lucas Hedges are especially convincing. Surely, Hedges seems to be subscribed to the role of the teenager struggling with problems since his big breakthrough with the drama "Manchester by the Sea", but he also does that really well.

"The prodigal son" is not free of small weaknesses. Edgerton doesn't always hit the right note as the director, so that the movie sometimes seems a bit unbalanced. But the overall impression is absolutely positive, because the story is stirring and stirring and makes you think about it long after the movie is over. A moving drama and a strong plea for tolerance and love and therefore also: Absolutely worth seeing!