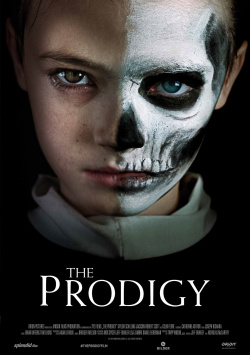 When Sarah (Taylor Schilling) holds her son Miles in her arms for the first time, she is the happiest mother in the world. But soon the child shows strange behaviors, which become more extreme from year to year. Sarah doesn't want to believe there's anything wrong with her son. She even visits a specialist (Colm Feore), who assures her that Miles is all right. What Sarah doesn't suspect: The frightened man has made acquaintance with the supernatural power that has taken possession of the boy and which threatens to gradually displace his true self. Sarah has little time left to save her son - or is it already too late?

"The Prodigy" is the latest prank by Nicholas McCarthy, who has already made a name for himself among horror fans with "The Pact". Here the director uses a very popular motif in this genre: that of horror children. After all, they've already provided some real classics. Think of The Omen or The Exorcist. Kids can be fucking creepy. And yes, even Jackson Robert Scott, who played little Georgie in the remake of the Stephen King classic "Es", can really look diabolically into the camera. It is thanks to him that you actually get a few good goose bumps moments here.

Other than that, the flat dialogues and the expressionless play of "Orange is the new Black"-star Taylor Schilling make for real horror. Despite some good ideas it soon becomes clear that Nicholas McCarthy is good at building up a tense atmosphere, but that he simply isn't a good storyteller. A few good moments of tension just aren't enough to really captivate the audience. The story has to be right, too, and it simply moves too much along well-trodden paths here.

Always, McCarthy consistently brings the otherwise very predictable events to an end. Thus, he all too obviously keeps a little door open for a possible sequel, but at the same time can also offer a really good shock moment. Of course, that's not enough to make "The Prodigy" a really thrilling movie, that would have what it takes to become a modern classic. But those who can also be satisfied with decent average goods will certainly get their money's worth. With some exceptions this is enough for one more: Worth seeing!