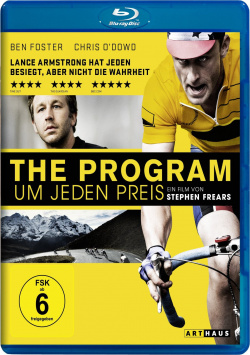 The Program - At any Price - Blu-ray

Film: International cycling was shaken to its foundations when in 2012 it was confirmed that Lance Armstrong of all people, the hero of many cycling fans and role model for many other athletes, had been doping for years. The man who, after a successful cancer treatment, achieved spectacular victories in the Tour de France, only managed this with the help of medication. As a result, all his titles were revoked from 1998 onwards and he himself was banned from professional cycling for the rest of his life. In 2013 he admitted doping in an interview, but didn't really repent. And so Lance Armstrong is now simply the "biggest fraud in sports history" for many people.

Director Stephen Frears ("The Queen", "Philomena") traces this unbelievable scandal in his extremely entertaining sports drama "The Program - Um jeden Preis". Based on the novel by journalist David Walsh - played in the film by Chris O`Dowd - the viewer follows a young Lance Armstrong (Ben Foster) during his first participation in the Tour de France, his first successes, his illness and the following spectacular victories that made him a legend. Frears tries to create the image of an ambitious man who is willing to do everything for success - even if he doesn't have to go completely legal ways. His will to be at the top of the podium is above sporting integrity, even if it is shown at the same time with what doggedness he has brought his body back into shape after the gruelling chemotherapy. Of course, this wasn't only possible through doping.

A great written script and first class actors, an especially in the bike race scenes stirring camera work and a light pinch of British humor make "The Program - Um jeden Preis" an extremely entertaining drama, which sometimes has satirical traits and then again looks like a thriller. Even though every viewer might know how this big scandal was uncovered and what the consequences were for Armstrong and his teammates, the film is never boring due to the dense, multi-layered staging.

This is also due to the strong play of the actors. Especially Ben Foster delivers a great performance as Lance Armstrong, which simply captivates the viewer. Frears and his team have created an athlete's drama that offers absolute enjoyment on a dramaturgical, visual and acting level. A film that shows in an entertaining way where megalomania can lead and what consequences it can have if you sell your ideals and your soul for success. Absolutely worth seeing!

image + sound: The Blu-ray image is absolutely clean and presents the action immersed in warm, powerful colors. The overall sharpness is on a very good level, whereby even smaller details are usually shown to advantage. The sound is available in a pleasantly lively DTS-HD Master Audio 5.1 mix, which allows the voices to be heard from the loudspeakers in a way that is easy to understand, especially in the case of the bike races, and is tuned to the soundtrack and the various sound effects. Good!

Extras: Beside the trailer and seven sometimes very interesting interviews (about 33 min.) the disc has a German Mini-Making of (about 3:58 min.), as well as three Promo-Featurettes about the journalist David Walsh (about 8:50 min.).), the transformation of Ben Foster into Lance Armstrong (ca. 4:21 min.) and about the shooting (ca. 3:18 min.).

Fazit: "The Program - Um jeden Preis" is a first-class sports drama, which offers absolute enjoyment on a dramaturgical, visual and acting level. The combination of a wonderful screenplay and great actors makes this drama one of the best films of the past cinema year. The Blu-ray presents the movie in very appealing picture and sound quality and also has some good extras to offer, of which one would have liked to see more. absolutely recommended!