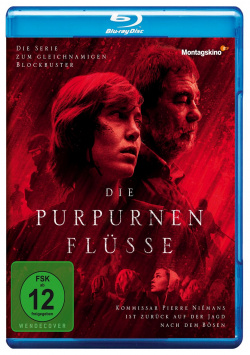 Film: When it comes to special, extraordinary murder cases, special investigation tactics are also required. This is why the "Central Office for Violent Crimes" was founded, for which Pierre Niémans (Olivier Marchal) works with his partner Camille Delaunay (Erika Sainte). The first case becomes very personal for Niémans as the victim is a former friend and colleague who has lived as a monk in a monastery for the last few years. Here, however, the two investigators quickly come across a wall of silence. The same goes for the investigation of an alleged accident in a sect or a murder in the Franco-German border area. But as mysterious as the cases may be, a cunning sniffer dog like Pierre Niémans still gets every murderer on the trail…

"The purple rivers" is based on the bestseller of the same name by Jean-Christophe Grangé. This was the model for an exciting cinema thriller in 2000 with Jean Reno in the role of the idiosyncratic investigator Pierre Niémans. In 2004 a sequel followed, but neither the success nor the quality of the first movie could be repeated. Now Niémans returns to solve cases of a particularly mysterious nature in this TV series, which often have to do with long-forgotten customs and religions.

The quality of the television version does not come close to that of the first feature film. The visual implementation is extremely atmospheric and the four cases, each of which is examined in two 45-minute episodes, have an exciting structure. But unfortunately the resolution is much too rushed, sometimes even in the last 60 seconds. Moreover, 90 minutes are just too long for the rather thin stories at the end. The four two-piece episodes in the second episode, for example, repeatedly show noticeable lengths, while the opening episodes offer solid tension.

"Die purpurnen Flüsse" is unfortunately not a very big litter. But there are enough show values and gripping moments of tension that lend the series a certain entertainment value. If you can overlook the sometimes quite weak scripts and just want to be entertained by a solid thriller, you'll be well served here. Worth seeing - albeit with small restrictions!

Picture + sound: The atmospheric images of the series come into their own thanks to the atmospheric colour scheme and the high overall sharpness. In the dark scenes, there are smaller deductions in the detail display, but otherwise the image quality leaves a really good impression. The DTS-HD Master Audio 5.1 mix remains largely unspectacular because - apart from a few sound effects and ambient noises - the dialogues and the restrained soundtrack dominate the action. Good.

Fazit: "Die purpurnen Flüsse" (The Purple Rivers) as a TV series unfortunately cannot achieve the quality of the first cinema film based on the bestseller by Jean-Christophe Grangé. Olivier Marchal does not have the rough charisma with which Jean Reno made the figure of Pierre Niéman such an interesting investigator. In addition, the stories are too simple to function for over 90 minutes. Nevertheless, there is a certain entertainment value and the visual implementation of the series has an engaging atmosphere. Thanks to the good picture and sound quality, this also shows to advantage on the Blu-ray. Bonus material is not available