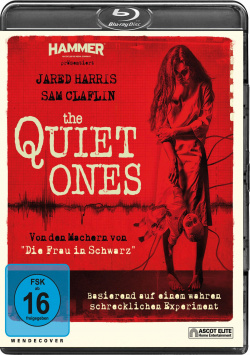 The Quiet Ones - Blu-ray

Film: Oxford in 1974: When film enthusiast Brian (Sam Clafin) agrees to document an experiment by Professor Joseph Coupland (Jared Harris) with his camera, he has no idea what he is really getting involved with. With this experiment, the professor wants to prove that suicidal Jane (Olivia Cooke) has telekinetic powers, the suppression of which has driven her into psychosis. When the university cuts the funds for this investigation, Coupland and his two colleagues Krissi (Erin Richards) and Harry (Rory Fleck-Byrne) retire together with Jane to an abandoned country house. Although Brian is only supposed to observe the whole thing and not intervene in any way, he can't resist the enormous attraction Jane exerts on him for long. He develops deep feelings for the girl, which rise exponentially with his doubts about Coupland's investigation methods. But what a cruel secret Jane's strange behavior really is and what dangerous power could be unleashed by the professor, Brian doesn't suspect yet...

"The Quiet Ones" is the latest production from the recently revived Hammer Studios, the film forge that once decisively shaped the horror genre. This will probably not succeed with this work, as the film by director John Pogue ("Quarantine 2") makes use of too many well-known elements. Somewhere between found footage and classic exorcism horror and spiced with some ghost house elements, there is hardly anything here that you could call original with a clear conscience. But that's not to say that the movie wouldn't work well for what it wants to be.

Due though the big surprises aren't there, the more traditional creepy effects, the first class sound design and the game of Olivia Cooke ("Bates Motel") can give you goose bumps over and over again. And the equipment and the camera work - as long as the camera optics don't take over the helm - also ensure that a gripping creepy atmosphere is created that remains in place until the finale. Acting, apart from the aforementioned Olivia Cooke, the whole thing is on a good average level, whereby Jared Harris and Sam Clafin ("The Tributes of Panem - Catching Fire") are particularly convincing.

How close the film is to the true events that inspired it cannot be said. On the other hand, it's quite clear that the makers decided to rely on a more traditional style in the first place, while foregoing the really big shock and disgust effects. Instead, the staging focuses on the atmosphere and horror of the old school without appearing too antiquated. And that also works very well. Certainly, the wheel is not reinvented here. But for those who just want to get a little creepy again and don't need blood fountains and brutal torture scenes, they should definitely take a look here. Worth seeing!

Picture + sound: The picture offers atmospheric horror atmosphere pure. Whenever the events are captured by Brian's camera, aging effects such as minor soiling, blurring and image loss are also used. Otherwise, the sharpness of the image and the contrast adjustment are on a good to very good level and even the atmospheric 70s colouring can be completely convincing. The sound shows its full strength especially in the creepier moments, when good sound effects not only give you goose bumps, but also provide clear dynamics in the surround area. Good!

Extras: As a bonus there is a promo featurette (about 2:2 min.), which is not much more than a longer trailer. In addition, the disc has eight interviews (approx. 21 min.), uncommented B-Roll recordings (approx. 2:12 min.), a film clip (approx. 0:44 min.), as well as the trailer and TV spots to offer.

Fazit: "The Quiet Ones" is an atmospheric horror thriller, which doesn't really offer anything new, but can score with some very effective horror moments, a successful basic atmosphere and an excellent Olivia Cooke. The Blu-ray presents the British horror film in good picture and sound quality, only the bonus material is somewhat superficial. Here would have been just more information about the true experiment on which the story is based, certainly interesting. Nevertheless this production from the legendary Hammer-Studios is absolutely recommendable for lovers of the cultivated horror!