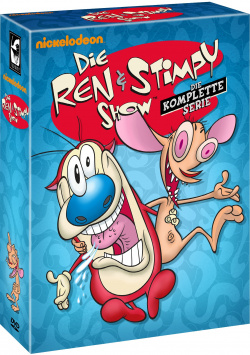 Content: Jubel Jubel Freu Freu! "The Ren & Stimpy Show" is finally available on DVD. The always pessimistic Chihuahua Ren Hoëck and his faithful companion, the somewhat simply structured, lovable tomcat Stimpson "Stimpy" J. Katzwinkel, saw the light of day in 1991 and provided 52 episodes on Nickelodeon for humor of a somewhat different kind. The series conceived by the Canadian animator John Kricfalusi was satirical and sometimes very, very evil. Even after Kricfalusi was released after only two seasons together with his production company Spümcø, and the series was then continued by another company, the anarchic spirit of the cartoon was still omnipresent in the following three seasons. Although in 1996 the last flap fell for the two unequal friends, "Ren & Stimpy" have not lost their cult character until today.

The humor of the series is sometimes very subversive, then again rather presented with the sledgehammer. Sometimes the spectators are made to laugh by small, fine gags and then the whole thing moves close to the limit of tastelessness again. It's a lot of things, but it's unpredictable. "The Ren & Stimpy Show" uses classic cartoon rules, only to lead them ad absurdum with a refreshing disrespect. This has been copied and developed again and again since then. Nevertheless, even more than 15 years after its end, the series still seems very special and different. This already begins with the fact that many episodes begin with wonderfully absurd advertising spots (for example for "dog drool", with which shy men gain new self-confidence or for the "Schmelzi cheese fist").

But even the actual stories hardly follow the rules known from other trick series. So there are always changing locations and also the background story of Ren and Stimpy varies constantly. Sometimes they're out in space, sometimes Stimpy tries his hand as an inventor, then they're suddenly hosts for a nature show or find themselves in a fairytale realm or try their hand at sausage farming in Canada. And also stylistically, the series repeatedly makes use of the most diverse means and can therefore hardly be put into a drawer. And even if some gags overshoot the mark and are simply unappetizing, the series has to be praised for the fact that something comparable simply doesn't exist.

Great praise also goes to the German dubbing, which is really extremely successful. Santiago Ziesmer ("Spongebob Schwammkopf") as Ren and Oliver Feld ("Seinfeld", "Johnny Bravo") as Stimpy lend the two figures in the German version their very own character, which in most moments can easily be compared with the original version. Only the appearances of some prominent guest stars are of course lost during dubbing. So you can hear Mark Hamill (Luke Skywalker) or cult musician Frank Zappa in the English original version.

That "The Ren & Stimpy Show" is so special and occupies a very special place in the hearts of many fans has also recognized the makers of the German DVD box. With a lot of effort they did everything to offer the German fans a box that can be called "complete" with a clear conscience. Cuts were filled with unedited material and the appropriate dubbing, and where there was no German sound, the original sound was subtitled in German. Since two episodes even lacked the German master completely, missing gaps were closed with the help of fans who made their private recordings available. Such an application is more than praiseworthy and lets hope also for future publications from the house Turbine on high quality. Fans can therefore already look forward to Turbine's "Rockos modernes Leben", the next cult cartoon, soon to be launched.

"Die Ren & Stimpy Show" is special and should not be accessible to every cartoon fan. But who already loved the series during the TV broadcast and likes weird, completely unpredictable humor, can't get past this beautiful box. Absolutely recommendable!

Picture + sound: Since some episodes have been going on for more than twenty years, the picture and sound quality is not always at a very high level. It is praiseworthy that the seller informs the buyer already on the back of the box. But those who now fear an audiovisual disaster can be reassured. Because in the worst moments, "The Ren & Stimpy Show" looks exactly like it did on television. There are some minor picture disturbances and here and there the whole thing seems a bit blurred, but in most moments the colouring and the overall sharpness are on an absolutely satisfactory level. The stereo sound is rather unspectacular, but the funny dialogues and the many sound effects come clearly understandable and relatively powerful from the speakers. Good!

Extras: Besides some nice goodies (posters, stickers, postcards) that come with the DVD box, the first DVD also has a worth seeing featurette about the creation of the series, as well as the so far unsent episode "Man`s Best Friend", which is only available on this German DVD release and therefore makes this box all the more recommendable for fans. Besides there is also a Sven Høek pencil test and a storyboard & Spümcø gallery. This beautiful box also has 32 (!) audio commentaries distributed across all discs by various staff members involved in the series (Spümcø team, John Kricfalusi & animation team or the producers of Spümcø with the animation team). Special treat here: two of the comments by Ren and Stimpy will be honoured in person. An absolute highlight for fans, of course! There's a deserved one for that: Very good!

Result: The makers of the DVD-Box of the "Ren & Stimpy Show" really put a lot of effort into offering the fans of the cult cartoon the best possible complete box of the 52 episodes of the series. Besides all the uncut episodes, a few nice goodies like posters and stickers, the viewer is offered a previously unseen episode, a making of and several amusing audio commentaries. Even if the picture and sound quality is not always perfect due to the age of the series, the box is more than successful and an absolute must for fans!