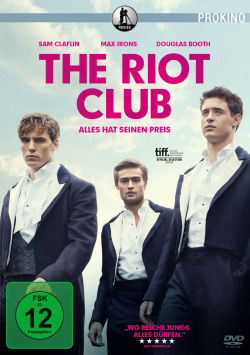 Film: Oxford University is training the future elite. Anyone who has the right relationships and the necessary small change is, of course, one of them even before graduation. The same goes for the members of the elitist "Riot Club", who of course select only the best of the first-year students to admit them to their conspiratorial circle. The fact that Alistair (Sam Clafin) was chosen this year is not surprising, given that his big brother was already a member. The fact that Miles (Max Irons) may also become a member of the club, however, would not have counted on the student coming from rather simple circumstances. Although his girlfriend Lauren (Holliday Grainger) can hardly sympathize with his new buddies, Miles enjoys finally belonging to the "better" circles. The fact that he would have trusted better in the intuition of his girlfriend, shows up only with the traditional Dinner of the club, which ends in this year in a disaster. But it's already too late for Miles...

With "The Riot Club" the Danish director Lone Scherfig has adapted the successful stage play "Posh" for the big screen. Only the long sequence in the pub, in which the elitist community celebrates its annual chaos dinner, gives a hint of the stage character of the story. Otherwise, however, Scherfig has largely detached himself from the original and has a drama interspersed with cynical humour about class differences and elitist dining-societies. Theatre writer Laura Wade, who also wrote the screenplay version of her play, was fascinated by the idea of immersing herself in the world of these clubs, where there is no place for women or the less well-to-do without appropriate relationships. The research turned out to be difficult, as these clubs have strict codes that forbid members to give interviews or generally talk to outsiders about their club.

As their story was not to be documented anyway, Wade took the liberty of letting her imagination run wild. The result at least feels as if it could correspond to reality - or at least comes very close to it. The attitude of the members of the "Riot Club" that they are something better because of their social position, that they can buy everything with money and influence and do not have to adhere to rules and morals, is probably shared by most members of the real connections of this kind. The film, which feels like an anti-version of the "Club of Dead Poets" in a moment, manages to convey this very well, especially at the beginning, with its biting humour.

The visual aesthetics and the good actors also contribute to the fact that the story works very well in the film version. But towards the end the whole thing loses a bit of speed and bite. The finale could have been a bit more vicious, even though the resolution offered by Scherfig and Wade is probably very close to reality. Nevertheless, in the last half hour the film suffers badly from the emotional coolness that does not only emanate from the members of the club. But even if not all aspects of the production are convincing, "The Riot Club" is a drama worth seeing and stirring, which excites, stirs you up and makes you think - and which also entertains you for a long time. There is a deserved one for that: Worth seeing!

image + sound: Since only one press stream was available for the test, the final picture and sound quality cannot be judged at this point.

Extras: As a bonus, the DVD has a miniature featurette (approx. 3:33 min.) in addition to the trailer.), as well as some promo interviews with the director and the actors (about 17 min.).

Fazit: "The Riot Club" is a drama that is successful over long distances, whose humorous tone has to give way to bitter cynicism from the beginning at the end. Well played and captivatingly staged, only the last act could have taken a bit more bite and malice. No rating can be given for the technical implementation of the DVD. The extras consist primarily of commercially available promo material, which doesn't really go into depth when you look at the shooting or the story. But the movie itself is enough to make the DVD "recommendable".