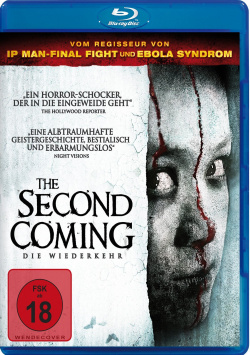 The Second Coming - The Return - Blu-ray

Content: Lucy (Joey Leong) shouldn't be around at all. Because her mother Jen (Maggie Shiu) had tried to abort her. Her father (Kenny Wong) lets her feel that Lucy wasn't wanted again and again because of his extremely distant, rejecting nature. Only with her brother Sunny (Don Li) she has a really cordial relationship. And so the family managed to build an almost perfect facade for 14 years. Until Lucy, after finding a strange vessel in the garden, is haunted by fearsome visions. When she falls onto the street during one of these seizures, she is taken to hospital, where she is diagnosed with no more than a mild concussion. But her visions get worse and worse and her behavior more and more unpredictable, so that Jen is soon convinced that her daughter is possessed by a demon. A medium (Susan Shaw) is supposed to help Lucy free herself from the evil power. But whatever has taken possession of Lucy isn't ready to leave the girl so easily...

"The Second Coming" is Herman Yau's new film, which was very successful with movies like "IP Man - Finale Fight". In the 90s Yau had specialized primarily in the horror genre, to which he now returns. For this he mixes set pieces from movies like "The Sixth Sense", "The Exorcist", "The Grudge", "Poltergeist" or his own work "The untold Story" to an atmospheric Mystery-Grueselfilm with some solid splatter interludes. In a puzzling way, he puts together the story about revenge, vigilante justice and nasty demons, which is repeatedly interrupted by flashbacks and culminates in a shocking revelation about Lucy's origins.

Whoever is not familiar with Asian cinema, but especially with its horror subject, might find the actors' play somewhat alienating. In addition, not all of the effects are really convincing. The story itself is exciting, but will also be a bit confusing towards the end. Especially with the emergence of the medium, the film loses intensity noticeably. Nevertheless, there are enough scenes that can satisfy genre fans and that are entertaining enough to make "The Second Coming" worth seeing despite its weaknesses. Yau is certainly not a new milestone in the horror genre. But if you like movies about demonic obsession and about vigilante justice with supernatural consequences, you should take a look here. Worth seeing!

image + sound: The Blu-Ray's image is absolutely clean and has a very good overall sharpness, which also brings out smaller details well in dark scenes. The color scheme seems a bit undercooled, but this underlines the dark look of the film. The DTS-HD 5.1 Mix provides pleasant movement on the surround channels, especially with well-placed shock moments, but at the same time transports the dialogues out of the speakers in a way that is easy to understand. Good!

Extras: The disc doesn't have any bonus material on offer until the trailer is released.

Fazit: "The Second Coming" is atmospheric horror from China, which can score with an exciting story and some good goose bumps. The fact that not all effects are convincing and that the story seems somewhat confused, especially in the last third, only marginally diminishes the entertainment value. All in all, this film is a worth seeing contribution for friends of Asian horror cinema, which is presented on the Blu-ray in decent picture and sound quality. Only bonus material is searched here in vain. For the target audience all in all: recommendable!