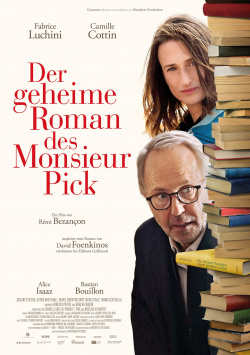 The secret novel of Monsieur Pick

Somewhere on a small peninsula in Brittany there is a very special, unique library. Because here all the books are collected that were rejected by the publishers and therefore never published. It is precisely in this unusual place that the young publisher Daphné (Alice Isaaz) makes a great discovery in the form of a manuscript that in her eyes absolutely must be published. And indeed: the novel immediately becomes a bestseller. The whole world celebrates the book - except for the famous literary critic Jean-Michel (Fabrice Luchini). He smells deceit - because apparently this literary masterpiece is supposed to be by Henri Pick, a pizza baker who died two years ago. Jean-Michel feels called upon to expose this supposed lie and he sets out in search of the truth with almost detective-like intuition. He gets unexpected help from Joséphine Pick (Camille Cottin), of all people, who wants to help save her father's life…

"Der geheime Roman des Monsieur Pick" is a light French comedy that asks a rather interesting question: how far can - or should - one separate an artistic work from its creator. Does a book get better or worse because it was written by a simple pizza baker? Is it still possible to like a painting, a piece of music or a film, even if the painter, the interpreter or the director has a dubious political opinion or is even a convicted criminal? Can a work of art even stand on its own?</This is the question R&eacute;mi Bezan&ccedil;on ("C'est la vie - That's how we are, that's life"), however, does not approach it with great dramaturgical depth, but with a winking lightness of touch, which works especially well through the wonderful interplay of Fabrice Luchini and Camille Cottin (known from the worthwhile series "Call my Agent"). It's simply fun to watch the two of them doing their literary investigation work and their biting bickering. Therefore, the resolution works very well, even if it's not really surprising and rather conventional.</p>

With good actors, wonderful landscape shots and a nice story "The Secret Novel of Monsieur Pick" manages to do one thing above all else: The movie can entertain very well. He gives great pleasure to his audience and can even give some interesting food for thought. And for this there is a well-deserved: worth seeing!