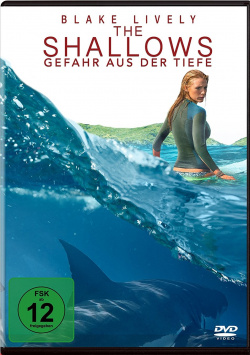 The Shallows - Danger from the Depth - DVD

Film: A dreamlike beach, restful solitude and paradisiacal conditions for surfers - that's what Nancy (Blake Lively) offers when she finally found the little beach her deceased mother had always raved about. Here the young woman actually only wants to spend a few quiet hours and surf a bit when she is attacked by a white shark in shallow waters. Injured she can save herself on a rock in the sea, only a few hundred meters from the beach. But these few meters could also be kilometers, because there seems to be no escape from the rock. The shark circles constantly around her and gives her no chance to flee ashore. And help is far and wide not in sight. Their ending seems sealed - but Nancy doesn't want to give up that easily…

With "The Shallows - Gefahr aus der Tiefe" director Jaume Collet-Serra ("Non-Stop", "Unknown Identity") ventures into dangerous waters. Because films that are only worn by one actor are in principle a risk, as they require not only full acting commitment, but also a stirring story in order to captivate the audience. Strictly speaking, the movie isn't just a one-person play, as some side characters appear here and there. Most of the time, however, Blake Lively can be seen alone on the canvas - at most in the company of a gull that has also been injured. Collet-Serra knows how to stage Lively attractively. But of course this is not enough to build up and maintain tension for over 90 minutes.

However, despite some really hanebüchener twists in the story, to which also the delightfully trashy finale belongs, the film is very entertaining and grippingly staged over long distances. Collet-Serra makes the constantly present danger very noticeable and intensifies it by the fact that the rescue is actually always within reach. One should not attach importance to logic thereby. "The Shallows" is strictly speaking a nicely filmed B-movie. But as such it is a lot of fun. Nancy's fight for survival is dramaturgically and theatrically perhaps not the big one. But the director always manages to push just the right buttons, so that the whole thing works well even in the most absurd moments.

Who wants to be entertained in an exciting way, who generally has a penchant for shark movies more from the beat of a "Deep Blue See" than the "White Shark" and who doesn't take the logic too seriously, this maritime thriller can be warmly recommended to him. And therefore, despite some weaknesses, there is also a decent one at the end: Worth seeing!

Picture + sound: The beautiful pictures of the (alpine) dream beach are also shown to advantage on the DVD. The colours are powerfully mixed and the overall sharpness is at a very high level. Even in darker scenes the many small details come into their own very well. The sound is available in a pleasantly dynamic Dolby Digital 5.1 mix, which not only makes the voices sound clear from the speakers, but also ensures a lot of movement in the multi-channel range, especially during shark attacks with well implemented sound effects. Good.

Extras: As a bonus the DVD has three missing scenes (approx. 4:40 min.), as well as Making of Featurettes about the shoot (approx. 5:43 min.), the creation of the shark (approx. 6:39 min.) and the location (approx. 5:47 min.) to offer. In addition, there is a somewhat lurid, but not uninteresting short documentary about real shark attacks (about 7:18 min.). Good.

Fazit: "The Shallows - Gefahr aus der Tiefe" has to struggle with a somewhat tough beginning, evil clichés and a not really logical plot. Nevertheless, the film offers good and at times even exciting entertainment with a convincing leading actress, which is not only due to the fact that she was very attractively staged. The DVD pleases with a good picture and sound quality. The bonus material isn't exactly extensive, but in places it's well worth seeing. Altogether there is a very clear one for it: Recommendable!