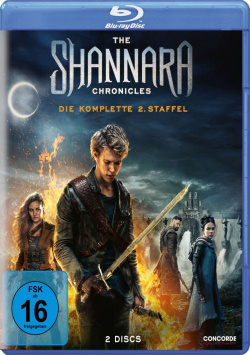 Content: One year has passed since the demons were defeated. Wil (Austen Butler) is still mourning his great love Amberle and has therefore retired to train as a healer. He doesn't really want to know anything more about the fight against evil. But the Four Lands are not yet safe. Because Bandon (Marcus Vanco), who has turned to the dark forces, wants to bring the Warlock Lord back to life. And that must be prevented at all costs. From the mysterious Mareth (Malese Jow), who claims to be Allanon's (Manu Bennett's) daughter, Will learns of the impending disaster. Only he can prevent the impending return. But not only Bandon and his henchmen want to put a spoke in his wheel. Suddenly the mysterious organization Crimson appears, which wants to destroy everything that has to do with magic and sorcery. With unexpected harshness and violence they plunge the country into chaos. Do Wil and his friends even have a chance against these enemies?

After the first season of "The Shannara Chronicles" ran on the former music station MTV, season 2 moved to the smaller station Spike. Whether this has also been accompanied by budget cuts cannot be assessed at this point. It is quite clear that at least the visual realization of the series based on the "Shannara" series by Terry Brooks was not spared. The scenery captured in New Zealand also looks absolutely magical in the second season, and the equipment, costumes and visual effects are also convincing for the most part.

Other it looks with the scripts and the actors. The plot is filled with predictable clichés and extremely flat dialogues, which the younger actors unfortunately can't catch either. Manu Bennett once again proves what you can get out of a rather weak presentation, and in some episodes he can even play a double role. He manages to make his game somehow always look believable and extremely entertaining, despite some really horrible dialogues.

The start into the second season is a bit tough and cannot compete with the exciting final of the first season. In the course of the further consequences the quality then constantly increases and it all comes to a gripping end, which unfortunately is not delivered then. After some really good episodes in which gripping conflicts are built up, the season finale should have been a big spectacle. Instead, the last episode is rather a lukewarm breeze, which hopefully hasn't been the last breath of the complete series in view of the poor ratings in the USA. Because again and again season 2 shows how much potential there is in the world created by Brooks, which has only been used marginally so far...

Although the level of the first episodes is only rarely reached and many good chances remain unused, the new "Shannara Chronicles" still offer short fantasy entertainment, which can be continued arf - but then please with better scripts. Because an attractive appearance is by no means everything. And that's why the bottom line, with a few restrictions, is that there's another deserved one: Worth seeing!

Picture + sound: As with the first season, the technical implementation of the Blu-ray is on a good to very good level - as can be expected from a current fantasy TV series. The picture is clean, has powerful colours and reveals a good overall sharpness. Only in some dark scenes does the image appear very coarse-grained, which also results in significant losses in the overall sharpness as well as in the detail display. The sound is available as a pleasantly lively DTS-HD MA 5.1 mix, which is usually dominated by the dialogues. For a current fantasy series this isn't overwhelming, but the bottom line is that it's still enough for a more than satisfied "good".

Extras: The second season has no bonus material except for trailers.

Fazit: Season 2 of "The Shannara Chronicles" has more problems than the first episodes. But all in all, the ten new episodes once again offer exciting entertainment, neat effects and a good basis for further adventures. The Blu-ray presents the series in decent picture and sound quality. Unfortunately, fans have to do without bonus material. Nevertheless there is still one conclusion to be drawn in round 2: Recommendable!