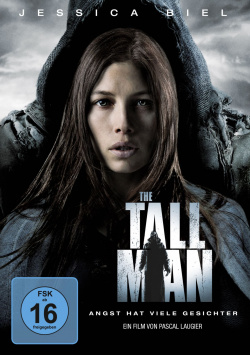 Contents: Since the death of her husband, the nurse Julia (Jessica Biel) has dedicated her life in the small miner town of Cold Rock solely to her son David and her work. Actually Julia could lead a quiet and content life despite the mourning for her husband. But a heavy shadow lies over the city. Apart from the tense economic situation, Cold Rock also has another problem to contend with: for some time now, children have been disappearing mysteriously. It is said that they would be kidnapped and killed in the forest by a mysterious creature that the inhabitants only call the "great man". For Julia, that was just a legend so far. But when David disappears one night, an especially bad nightmare begins for her, too...

"The Tall Man" is the English debut of the French director Pascal Laugier, who recently made a not uncontroversial contribution to the horror genre with "Martyrs". His latest work is also a horror movie, but "The Tall Man" isn't as brutal and disturbing as "Martyrs". And even though the movie lacks a certain intensity, Laugier manages to achieve a lasting effect with the viewer even with a clearly pulled shock brake. Twice the action takes a surprising turn, which turns the film, which was started as a rather classic horror film, first into a serial killer thriller and then into a dark drama.

Not every viewer will be able to make friends with these turns. Especially those horror fans who like it a bit more bloody might be disappointed by the change of style after the promising first third. But whoever succeeds in getting involved with the story and whoever accepts the resolution, which is not necessarily characterized by absolute realism, is rewarded with a gripping atmosphere, a captivating visual realization and a dense staging, which only slowly lets the viewer go after the credits.

The actors all deliver solid to good performances, which is especially noticeable in the second half of the film. Whether the leading actress Jessica Biel, the genre-proven young actress Jodelle Ferland ("Fall 39") or the former "X-Files" villain William B. Davis, they all play their roles convincingly and with appropriate seriousness even in the more clichéd or dramaturgically weaker moments. So the good acting of the actors also helps that the movie can leave such a strong impression.

Picture + sound: The visual implementation of the film on the DVD captures the dark and sinister atmosphere of the story very well. Although the action in many scenes takes place rather in the dark, the sharpness of the picture and the detailed depiction leave a positive impression, as does the harmonious colouring. The sound is largely unobtrusive, but the very central action is repeatedly broken up by some good surround effects and atmospheric ambient noises. Good!

Extras: Besides the trailer for the movie, the DVD also has some advertising interviews with the director and the actors (about 20 minutes).

Conclusion: "The Tall Man" is an exciting thriller, which starts like a usual horror movie with light fantasy and mystery elements, but which also has some surprises in store, through which the action experiences two drastic twists. It may be that these twists will not necessarily appeal to more hardened horror fans. But if you get involved with it, you get a really intense movie with a lasting effect. So it doesn't bother you that the technically well done DVD only has a few superficial promo interviews to offer as a bonus. Recommended