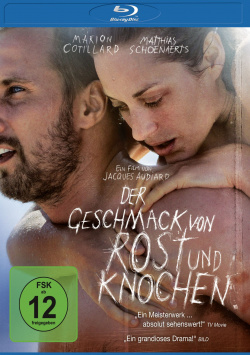 The taste of rust and bone - Blu-Ray

Film: The bulky, emotionally closed Ali (Matthias Schoenaerts) travels with his five-year-old son Sam (Armand Verdure) to his sister Anna (Corinne Masiero) on the Côte d'Azur. There he hopes for a better life, because at the moment things don't look too good for him. He has no money, no job and is confronted from one day to the next with a role as a father that is completely overwhelming for him. Here he can now live in his sister's garage and finds two jobs that he can dedicate himself to while Anna takes care of Sam. During a shift as a doorman in a nightclub Ali meets the attractive and brittle Stéphanie (Marion Cotillard). They understand each other at first go, since both appreciate the non-binding nature. And so it seems to stay with the unique encounter. But after some time Ali unexpectedly receives a phone call from Stéphanie, who is confined to a wheelchair after a catastrophic accident at work in Marineland and has lost all joie de vivre. She can't handle pity, she feels overwhelmed by emotions. Ali's sober and objective nature seems to be the only thing that helps her through this difficult time. And indeed: his way of helping her into the sea or giving her back the joy of sex helps Stéphanie out of her depression. But the small signs of happiness don't seem to last long...

With "The Taste of Rust and Bone" Jacques Audiard, who already inspired with "A Prophet", has staged a moving and pleasantly unsentimental drama, which, despite a rather cool atmosphere at the beginning, quickly grabs the emotions of the audience and stirs them up again and again. Audiard knows very well how not to let his audience be completely overwhelmed by the sadness of his characters and their stories. Again and again he incorporates moments that in their own way are either simply beautiful or reservedly humorous. But such moments manage to bind the viewer to the characters, who otherwise wouldn't seem very likeable. Especially with Ali this is of immense importance, as his apparent disinterest in his environment, whether in his son, his sister or the women with whom he meets, is not exactly a loveable quality. But through the subtle staging and the convincing play of Matthias Schoenaerts it becomes clear that Ali has to struggle with his inner demons and is by no means as dulled as it initially seems.

The same also applies to Stéphanie, who not only finds her way back into life through Ali's pragmatic help from her self-imposed isolation, but also feels something like admiration and passion when she sees the illegal fistfights he has fought out, with which he additionally earns himself some money. Even though the movie is a little bit too thick when it comes to the strokes of fate and the finale lacks the subtlety that otherwise distinguishes the movie, this fascinating portrait of two lives that have been badly battered by life leaves an absolutely positive impression at the end. This is due in particular to the perfect interplay of the strong performances of the actors and the captivating visual language, which dresses the events in a very special atmosphere that is difficult to escape. Particularly impressive is the scene of Stéphanie's Accident, one of the greatest goose bumps in recent months.

"The Taste of Rust and Bone" is truly not an easy film. A certain desolation dominates too much, which is intensified by the picturesque scenery of the Côte d'Azur. It's precisely the contrast of a region with which one associates a carefree, relaxed life or even luxury with the everyday life of the protagonists dominated by dreariness and grey hopelessness that makes the film so appealing and impressive. If you like great acting cinema from Europe and don't let yourself be deterred by a difficult dramaturgy, you will realize at the end that Jacques Audiard has staged an extremely life-affirming and optimistic film, which has a long lasting effect on the viewer. And therefore, despite some small lengths and the somewhat too thickly applied end, there is also a bottom line: Absolutely worth seeing!

image + sound: The very clean image has a very good sharpness, which can also convince in darker scenes. In addition, the very natural-looking coloring, which especially the blue of the sea on the Côte d'Azur wonderfully reproduces. Also the adjustment of the black values and the contrasts leave a positive impression. The sound, which is a bit more unspectacular due to the genre, transports the dialogues out of the speakers in a clearly understandable way. Well-transformed ambient noises such as sea noise and smaller sound effects ensure pleasant dynamics in the surround sound range. Not spectacular, but good!

Extras: As a bonus there are six cut scenes (approx. 6:34 min.), as well as a short look at the special effects (2:25 min.), which gave the impression that Stéphanie no longer has legs. Otherwise only the trailer is included in the bonus menu. The almost one-hour making of, which can be found on home cinema media in other countries, unfortunately did not make it to Germany. Schade!

Fazit: "Der Geschmack von Rost und Knochen" is an excellently played drama, which dramaturgically turns out to be a not exactly light fare, but at the end it still turns out to be a very positive, life-affirming movie. Even though fate strikes once too often at the end, the film as a whole is an excellent example of high-quality and sustainable arthouse cinema from Europe. absolutely recommended!