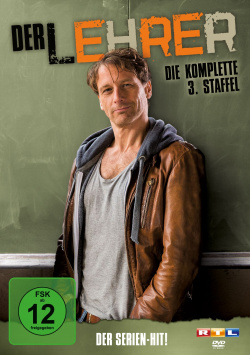 Film: Chemistry teacher Stefan Vollmer (Hendrik Duryn) imagined things a little differently when he followed his colleague Karin Noske (Jessica Ginkel) on a plane to Boston, only to find out that she hadn't even flown to her boyfriend who lives there. At the beginning of the new school year Stefan of course doesn't want to admit this shame and simply claims that he had spent a wild summer vacation in Tuscany - not knowing that Karin is not telling him that she has long since separated from her boyfriend. The path for a relationship - or at least a hot affair - would now actually be clear. But there is no time for that now, because the merging of the comprehensive school with the nearby Hauptschule, which burnt down shortly before the start of school, causes a lot of chaos in the college and a lot of new problems. On the very first day Stefan has to deal with a petty criminal whom he absolutely wants to lead back to the right path. But this is only the beginning of a turbulent school year in which Stefan has to deal with anorexia, pregnancy, depression and theft. In addition, he must assist a student with his mother's serious illness, set up a boxing club to keep the students from turning turnip in secret fight clubs, or give good advice to two lovers about the problems around the first time. And by the way he should also get his emotional chaos with Karin on the line? That simply can't go well...

For a long time it looked like "The Teacher" would have to look for a new job in 2009 after only one season. But RTL believed in the concept and the reviews were good, so that the series got a second season four years after the broadcast of the first season. After the odds were satisfactory, a third season was ordered in the wake of the success of "Fack ju Göhte", which enabled the unconventional chemistry teacher to further increase his popularity. A fourth season was quickly decided. Before the film is shot, the ten episodes of the 3rd season appear on DVD. Again, the makers fall back on the proven concept: there is some comedy, a little romance and a lot of social criticism in the drama.

That works quite well over long stretches, even if some clichés are too thick. The real problem is that most of the problems addressed in the series are treated too superficially. The intentions of the movers and shakers to respond in every episode to the normal worries, fears and problems of young people and also to address the weaknesses of the school system are to be classified as absolutely commendable. Since most of the stories are dealt with in one episode and there are other plot strands as well, the necessary depth simply can't be offered. Moreover, the qualitative implementation is too unbalanced. As good as some elements of the stories are drawn, so flat are others. It's entertaining for long stretches, but it's far behind what would have been possible here.

The actors are good and likeable, even though Hendrick Duryn sometimes articulates his sentences a bit too pressed out. The romance between Stefan and Karin is nice, but the complications sometimes seem too forced to prolong the "get-you-or-get-you-not" skirmish unnecessarily. But thanks to the good chemistry between Duryn and Jessica Ginkel, this also works really well in the end. The Teacher" is certainly not a revolutionary series that scores with originality and depth. But even though the possibilities offered by the subject of school aren't completely exhausted and the mixture of comedy and drama sometimes leads to dramaturgical superficiality, season 3 also offers entertaining and quite charming entertainment with some very funny moments. But there are also some scenes that get to your heart or even make you think a bit. And that's exactly why the series still deserves a satisfied "sight worth seeing" despite some minor weaknesses!

Picture + sound: The technical implementation is on a good TV level. The picture is clean, the overall sharpness is satisfactory and the detail can also be convincing in many moments. The colours are mixed attractively, so that the picturesque landscapes come into their own. The sound presented in a stereo mix is primarily determined by the dialogues, but from time to time the music and ambient noises also create a harmonious atmosphere. Good!

Extras: Unfortunately, the 3-Disc Set does not have any bonus material to offer.

Fazit: "The Teacher" remains true to his concept even in season 3. The mixture of comedy, drama and romance doesn't always work out, because especially the "problems taken from life" of the students remain a bit superficial, as they are mostly dealt with within one episode - which of course doesn't correspond to reality at all. Good ambitions, some amusing jokes, the actors and the light pinch of romance make sure that all fans of the first two seasons will love these new episodes. And that's why, despite the lack of extras, there is a clear message for this relay box: Recommendable!