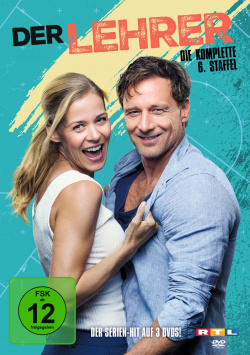 Film: That's typical for Stefan Vollmer (Hendrik Duryn) and his colleague Karin Noske (Jessica Ginkel): Finally the two are a couple, so they announced their offspring. This happened so quickly that the child could theoretically also have come from Karin's ex Michael (Gabriel Merz), who is also Stefan's best friend. But even when the birth was well done and the fatherhood was clarified, the chaos doesn't stop with the two of them - neither privately nor professionally. Because as soon as Karin returns from her maternity leave, her new colleague Patrick Petzold (Eugen Bauder) falls head over heels in love with her. But Stefan also has a new admirer. Will the two's relationship survive the young parenthood and the new temptations? Maybe Stefan and Karin will finally end up in front of the altar?

"The teacher" is a rather unusual success story in the series landscape. When the series started for the first time in 2009, the odds were rather low, so it seemed that it would remain the only season of the series. But thanks to good reviews and the firm belief in the concept, new episodes were commissioned four years later, which then brought in quite decent viewer numbers. Now the turbulent school life of Stefan Vollmer and his colleagues is going into its sixth season - and the odds continue to rise. Over the years, the makers have changed little about the concept: there is something comedy seasoned with slapstick, a little romance and a lot of drama permeated by social criticism.

Mania of Beauty, ADHD, Inclusion, arranged marriages, stalkers - the topics addressed in this season are once again extremely diverse and taken from life. But the problem this time is again that, despite all the good intentions, they are treated too superficially. Often only one speech from Stefan is enough, and the whole thing is good again. That's not what real life looks like. The fact that the episodes not only focus on the romance between Stefan and Karin, but also try to respond to the normal worries, fears and problems of young people is well-intentioned. Only the implementation should perhaps not have been so superficial.

But at least "The Teacher" manages in his own way to address grievances and problems that are otherwise hardly addressed. And that's more than praiseworthy. But in the end the whole thing is of course first and foremost a light entertainment series that is supposed to be fun for its target audience. And here again the sixth season delivers more than satisfactorily. So if you already liked the first seasons, you should definitely shorten the waiting time for season 7 with this DVD box. Worth seeing!

Picture + sound: The audiovisual implementation of the series on this DVD is again on a good TV level this season. The picture is clean, the overall sharpness is satisfactory and the detail can also be convincing in many moments. The colours are powerfully mixed, with contrasts sometimes appearing somewhat exaggerated, but this seems to be an intentional stylistic device. The sound presented in a Dolby Digital 2.0 mix is primarily determined by the dialogues, but from time to time the music, smaller sound effects and ambient noises also create a harmonious atmosphere. Good.

Extras: The third DVD features a 20-minute compilation of interview clips and behind-the-scenes footage. The individual clips are too short to provide really substantial information. But there are still some interesting, but also amusing moments to discover here. That's why there's a decent one for this extra: Worth seeing!

Fazit: The sixth season of "The Teacher" consistently continues the successful concept of the series. Those who already liked the first five seasons can enjoy the new developments in the relationship between Stefan and Karin, new turbulences at the school and of course again Stefans unconventional teaching methods. This is not particularly profound in the new episodes either, but is implemented in a charming and entertaining way. The twelve episodes shine on three DVDs in good picture and sound quality. And some behind-the-scenes material is also available as a bonus. Absolutely recommendable for fans!