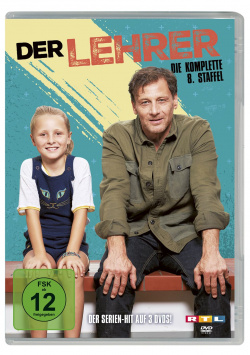 content: (ATTENTION: if you don't know the end of season 7 yet, you should skip the table of contents NOW immediately and go on to the next paragraph)

5 years have passed since the death of Karin (Jessica Ginkel) Still plagued by deep sorrow, Stefan Vollmer (Hendrik Duryn) does his best to master his role as the single father of the now six-year-old Frida (Leni infant) and at the same time to be there for his students. The fact that his son Jonas (Merlin Rose) is now also starting as a teacher at the Georg-Schwerthoff-Gesamtschule and that Emma (Zsá Zsá Inci Bürkle), a former student, is coming to the GSG as a trainee teacher, does not exactly make life easier for such a tough teacher. And while Stefan is busy coping with his grief and maybe even opening up for a new love, he has to deal with the problems of his students at school - and they have it in them again this time…

No one really thought that when "The Teacher" started its first season in 2009 and due to weak ratings the transfer to season 2 was in danger that he would still be in service after eleven years. In season 8, the makers fall back on the proven concept on the one hand: there is a little comedy, a little romance and a lot of drama infused with social criticism. At the same time, they also try to give the whole thing some fresh air. Due to a leap in time Stefan now has to assert himself as a single dad of a six-year-old, but at the same time he is allowed to open up for a new romance, without it seeming like a betrayal of Karin for the fans.

From the very beginning it was always important to the makers to weave realistically problems of young people into the plot. This may be the fear of the climate catastrophe, everyday sexism, mobbing or racism as well as very personal fears or the difficulty of standing by one's own sexuality as a young person. Certainly, as in previous seasons, there is simply not enough time to deal with such problems in depth. The solution usually lies in a clear announcement from Stefan - and unfortunately, in real life this is never quite so easy. Nevertheless, it's good that worries and fears of pupils are dealt with in such an entertainment series.

not only as a teacher with partly quite unconventional methods Hendrik Duryn can convince again. As a single dad he is also doing his job very well, which may also be due to the pleasantly natural play of his serial daughter Leni Säugling. With the right mixture of drama, humor and charm "The Teacher" can also convince in the eighth round. And for that there is a clear bottom line: Worth seeing! </The technical implementation is, as usual, on a good TV level. The picture is pleasantly sharp and can also convince with the detail display. There are no real defects such as soiling or strong image noise. The colors are mixed in an appealing way, which makes especially the picturesque landscapes stand out well. The sound presented in a stereo mix is primarily determined by the dialogues, but every now and then the music and ambient noises also provide a harmonious atmosphere. Good! </p>

Extras: As a bonus there are some "Behind the Scenes" impressions on the third disc (ca. 7:19 min.), among others from the guest appearance of Mike Singer. Due to their format and duration, these clips look a bit like Instagram Stories and it is reasonable to assume that they were actually shot for social media and less for the DVD.

Conclusion: "The Teacher" has mastered the farewell of Jessica Ginkel well. The makers have given the series some new impulses in the eighth season, but otherwise remain true to the proven concept. Those who liked the series so far will continue to love it despite some changes. The DVD box of season 8 presents all episodes in good picture and sound quality and also offers a few short promo clips from the shooting. Recommendable!