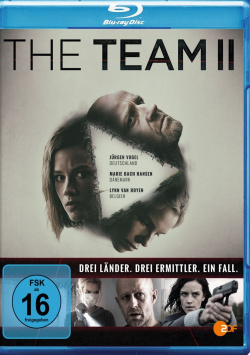 Film: In the Danish Marschenland seven people are shot in a former Bed and Breakfast, which now serves as a refuge for refugees. Since the owner of the Bed and Breakfast is a German who is not unknown to the authorities and an informant of the Belgian intelligence service among the dead, Europol is forming a new Joint Investigation Team. Danish commissioner Nelly Winther (Marie Bach Hansen), her German colleague Gregor Weiss (Jürgen Vogel) and Belgian intelligence officer Paula Liekens (Lynn Van Royen) will solve the case before it can make international waves. With a man from the local right-wing radical scene, a perpetrator seems quickly identified. But even a dangerous terrorist organization and illegal art dealers seem to be involved in this case, which is much more complex than it seemed at first…

After Lars Mikkelsen, Jasmin Gerat and Veerle Baetens, who successfully completed the first deployment of the multinational task force, the European co-production "The Team" returns with new consequences and a new team. The idea of having a case investigated by three investigative teams from different European countries gives the series a very special appeal, even at the second attempt, which can unfold particularly well in the original multilingual version. The case itself is quite exciting, but already in the first episode the weaknesses of this season are clearly noticeable.

In addition to some stereotypes and exaggerated figures - the underhand Austrian art dealers are almost ridiculous caricatures - there are also some completely superfluous subplots. How, for example, it is really attempted with all its might to integrate Gregor's daughter into the plot is not only completely illogical, but also almost annoying. The insight into the difficult family circumstances of Nelly, on the other hand, are almost great dramaturgical art, but they don't really contribute anything to the actual story.

When this season concentrates on the actual case, there are many successful moments of tension. Yes, here, too, much is a little predictable and makes use of some disturbing clichés. But as a viewer you are still entertained in a good way. The quality of the first season is not as good as it might have been - maybe because the Belgian investigator is a bit pale this time - but especially for a cosy crime Sunday on the couch the series still offers enough good food in this weaker second attempt! Worth seeing!

Picture + sound: With its very restrained colour scheme, the picture underlines well the dark and dreary atmosphere of the series. All in all, the sharpness and the detailed depiction leave a good impression even in the darker scenes. The dialogue and the restrained soundtrack predominate in the sound, but every now and then also well used sound effects make sure that not only the tension increases, but also that a little dynamic comes into the surround range. Good.

Extras: Unfortunately there are no extras for this second season.

Fazit: "The Team" is a European co-production that follows the work of three investigative teams on a cross-border case. After the extremely exciting first season, a new team will be deployed that will not only have to fight against terrorists, right-wing radicals and illegal art dealers, but also against a number of clichés. Despite some lengths and almost annoying stereotypes, the second season still offers a lot of excitement, which makes the deployment of the new team worth seeing. The Blu-ray is technically convincing, but disappointed by the lack of any extras.