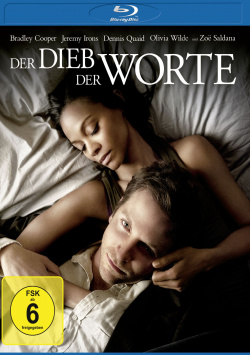 The Thief of Words - Blu-Ray

Film: The young author Rory Jansen (Bradley Cooper) has been suffering from an enormous writer's block for a long time and his dream of a career as a writer is becoming more and more distant. But then one day he finds an unpublished manuscript that captivates him after just a few words. Without really knowing why, Rory passes the work off as his creation. Suddenly he is celebrated as the new star of the literary scene and not only the critics lie at his feet. But then one day an old man (Jeremy Irons) appears, who claims to be the real author of the hypnotic words for which Rory just gets the credit. To prove his claim, the man tells the young author about the years he spent as a young man in Paris and the price he had to pay for the book. But does Rory and the old man really exist, or are they a pure invention of the writer Clay Hammond (Dennis Quaid), who has a revealing conversation with the attractive student Daniella (Olivia Wilde) about the true background of his book about the thief of words...

It almost borders on irony that parts of "The Thief of Words" have a striking resemblance to Martin Suter's "Purple Purple", even though the two directors Brian Klugman and Lee Sternthal claim to know neither the book nor its film adaptation and even wrote their story before the publication of Suter's novel. Whether they found a manuscript by Suter in an old bag, or whether the parallels are just a coincidence, is left to the discretion of the author. The fact is that the two filmmakers not only tell their story much more seriously than Suter, but have also added two more story levels, which at the end make the whole thing stand in a completely different light.

The individual elements of the nested stories are quite successful. The actors all perform very well, with Jeremy Irons as the mysterious old man and Nora Arnezeder as the great lost love from his youth in Paris leaving a particularly lasting impression. Visually, the film also has a particularly captivating atmosphere, with the scenes set in Paris (and shot in Quebec, Canada) also standing out. All three strands of action work very well on their own. The only problem is that there just isn't enough time to work out all the stories and their characters well. For example, the character of Rory's wife Dora (Zoe Saldana) remains very pale and the not uninteresting story about Clay and the curious student Daniella (Olivia Wilde) remains too superficial, especially in the decisive moments.

Although the linking of the three stories is cleverly solved in itself and in a certain way has a lasting effect, the resolution seems a little undecided. Somehow the story that carries the whole thing runs empty and leaves the viewer a little perplexed. A film doesn't have to chew everything up for its audience and present obvious solutions on a silver platter. However, if a certain tension is built up throughout the whole movie, then it should also be adequately resolved. And that's exactly what Klugman and Sternthal simply can't do with their way of ending the Clay/Daniella storyline.

Nevertheless: the story about Rory and the stolen novel and the story of the old man are strong enough to carry "The Thief of Words" beyond its weaker moments. It is an engaging drama full of romance, heart and sadness, with exciting moments, moments full of poetry and subtle humour. And that's enough to make this film, despite its obvious weaknesses, a more than deserved "worth seeing"!

image + sound: The image of the Blu-Ray convinces with a natural, powerful color scheme, a high sharpness of detail and a decent image depth. Noise, artifacts or other disturbances cannot be detected and even in the darker moments the display still has a very good richness of detail. The sound present in a DTS-HD 5.1 Master Audio Mix matches the sound of the movie. Quiet, atmospheric and mainly dominated by the dialogues, that's how the mix presents itself, which doesn't have any big surround moments to offer, but which transports the movie out of the speakers in a very atmospheric way. Very good!

Extras: The bonus material of the Blu-Ray is unfortunately a bit meager. Only a much too short look behind the scenes (approx. 8:30 min.) and trailer is offered to the viewer here. Mager.

Fazit: "The Thief of Words" is a drama consisting of several interlaced storylines, which has some small pendants, but also some very strong moments and good actor performances to offer. Despite its weaknesses, this is an absolutely beautiful film, which presents itself on Blu-Ray in good picture and sound quality. For viewers who like it romantic, sad and poetic, this work is absolutely recommendable!