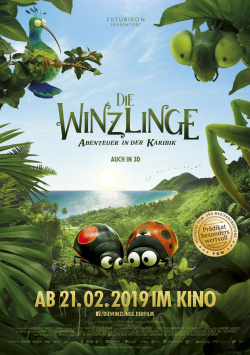 The Tiny ones - Adventures in the Caribbean

When a little ladybird on a secret excursion on the run from a horde of red ants lands in a cardboard box shipped to the Caribbean, his dad does everything he can to follow him and bring his offspring back home. In fact, he does, but the adventure is far from over. The two of them make friends with a group of Caribbean ladybirds whose picturesque homeland is threatened by humans. A construction project could destroy the beetle's home forever. With the help of their faithful friends from home, a black ant and a small spider, the ladybirds hatch a plan to save the paradise of their new friends…   <x>N</Almost ten years ago H&eacute;l&egrave;ne Giraud and Thomas Szabo gave the audience an original and endearing insight into the life of insects with the animation series "Minuscule". In 78 4 to 6 minute long clips, real landscape shots were mixed with animated insects. The series became a complete success not only in France, which is why the two filmmakers felt confirmed in their intention to produce a movie from the world of cute insects. The result was called "Die Winzlinge - Operation Zuckerdose" and attracted around 5 million viewers to cinemas worldwide. No wonder, then, that the two filmmakers are now allowed to serve us a second helping.

"The tiny ones - adventures in the Caribbean" moves the action to Guadeloupe, where the lovable heroes from part 1 can immerse themselves in a whole new world together with the spectators. This is again filled with fascinating landscape shots, wonderful weird humor and a little bit of well-dosed tension. People who only appeared at the edge in the first film take on a much bigger role in the last act. However, the makers also consistently do without dialogues here, whereby the whole thing retains its special charm. However, the film gets a very clear ecological message through the interference of the people, which wasn't present in this form in the first film yet.

You just have to love these tiny creatures. It is true that this second cinema adventure does not quite come close to its award-winning predecessor. Nevertheless, this animation adventure is again a very original, detail-loving, subtle and extremely funny pleasure, which can be recommended not only to children, but also to adults. Absolutely worth seeing!

Kino Trailer zum Film "The Tiny ones - Adventures in the Caribbean (Frankreich/Belgien 2018)"
Loading the player ...