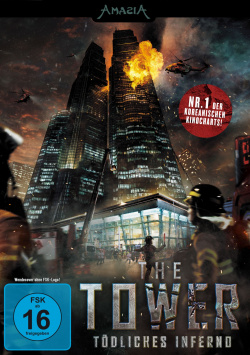 Contents: Dae-ho (Kim Sang-Kyung), building manager of the exclusive Tower Sky skyscraper, could truly imagine something more pleasant than spending Christmas at work. The single father would much rather spend the day with his little daughter Ha-na (Jo Min-ah). But since Mr. Jo (Cha In-Pyo), the owner of the skyscraper, wants to throw his exclusive guests a lavish "White Christmas" party, the staff of the "Tower Sky" has to work hard on a day like Christmas. The restaurant manager Yoon-hee Seo (Son Ye-jin), with whom Dae-ho is secretly in love, also has to offer the best possible with her team in order to satisfy Mr. Jo's guests. But when at the climax of the party some helicopters are supposed to make sure that it snows for the guests, there is a catastrophe. One of the helicopters crashes into the skyscraper and a deadly fire breaks out. The upper floors of the ultra-modern building are transformed in no time at all into a hell of flames that could collapse the entire skyscraper. Amidst the panic chaos Dae-ho, Yoon-hee, Ha-na and other survivors have to fight to escape the fire with the help of firefighter Young-ki (Sul Kyung-gu) - a fight against time that seems to be lost long ago...

With "The Tower", Korean Kim Ji-Hon has staged a technically outstanding homage to the catastrophe film of the 1970s, whereby of course the classic "Flaming Inferno" was the inspiration for his spectacle. So it's no surprise that the figure drawing and the dramaturgical structure of the various conflict situations turned out to be very clichéd. But that's not too bad in this case, since such clichés simply belong to the classic disaster movie. Only the somewhat exaggeratedly stupid kitchen assistant, who wants to propose a marriage to his girlfriend, and the hysterical attacks of Ha-na nerve a little bit in the long run, whereby with Ha-na this can also be partly due to the synchronization.

Such weaknesses are easily compensated by the film with its effects. With a mixture of 26 elaborate sets, miniatures and CGI, Kim Ji-Hon and his team have conjured up an exciting and in some sequences almost breathtaking spectacle from the dramaturgically not exactly original work in the almost two-year post-production phase, which doesn't need to shy away from comparison with its models from Hollywood. Scenes like the helicopter crash or the daring attempt to cross a glass bridge connecting both towers of the skyscraper belong to the highlights of the movie besides the very wet finale without a doubt.

Who doesn't attach too much importance to logic and who also can accept some compromises in the character drawing and instead wants to get excitement and action in the best disaster movie tradition, this movie hit from Korea can be warmly recommended to him. Worth seeing!

Picture + sound: The picture of the DVD convinces with a decent sharpness and a very harmonious colouring. Also the good adjustment of black values and contrasts, as well as the good detail representation leave a very positive impression. In the first third of the film, the sound is still somewhat reserved, before smaller and richer sound effects ensure good utilization of the surround channels. Good!

Extras: As a bonus the DVD unfortunately only has the trailer for the film to offer.

Fazit: "The Tower" is a successful mixture of homage to the catastrophe films of the 70s and modern trick technology. Even though the story makes use of numerous quite worn out clichés and thus doesn't deliver any real surprises, action and effects make sure that the viewer gets two exciting and entertaining hours. The cinema hit from Korea presents itself in Germany as a home cinema premiere in good picture and sound quality, only the lack of noteworthy extras has a negative effect. Nevertheless: for lovers of classic disaster movies absolutely worth seeing!