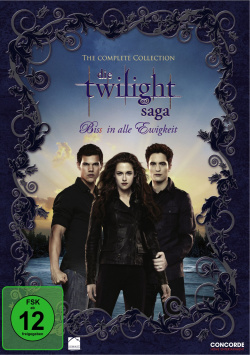 Contents: Bella finally decided to marry her Edward. The Volturi are defeated and the dangers for the couple, their daughter Renesmee banished. And for all "Twilight" fans, an exciting time has come to an end. Those who have not read the books and have never been able to make friends with the films will hardly understand the hype that has been created in recent years about the novels, the supernatural love triangle between man, vampire and werewolf or about the leading actors. But even if the films are not the best that has been shot for young adults in the past, it cannot be denied that Stephenie Meyer and the makers of the film versions of her books hit a nerve with the fans, whereby the stories about Bella, Edward and Jacob simply made millions of mainly female viewers happy. They were excited, dreaming and languishing, alone or in fan communities - all over the world.

But now this story is over. And even though Stephenie Meyer hasn't ruled out returning to this world, this "Bis(s)" series will always remain something very special that can't be repeated that easily. Fans, who want to celebrate this farewell once again, now get the appropriate opportunity with the "Bis(s) in alle Ewigkeit Complete Collection" of the films. Here once again a short summary of the contents of the individual films:

own embroiderer Bella (Kristen Stewart) lives with her mother in Phoenix. When she remarries and wants to travel across the USA with her new husband, Bella moves to her father in the small town of Forks. Here, in the heart of Washington, there is hardly anything to experience except constant rain. But then she meets the mysterious Edward Cullen (Robert Pattinson), who seems to be the first person to look directly into her soul. But even though Edward is her soul mate, the quickly budding love between the two is not under a good star. Edward is different from the other boys at Bella's school: he is incredibly fast, enormously strong - and hasn't aged a day in 90 years. No wonder, Edward is a vampire. And even if he and his family do not feed on human blood, a relationship with him is a great danger for Bella. Because when the evil bloodsuckers Laurent and James, the deadly enemies of the Cullen family, come to Forks, Bella has to realize that as Edward's girlfriend she is at the top of the vampire's menu...

For some time now Bella Swan (Kristen Stewart) and Vampire Edward Cullen (Robert Pattinson) are a couple. But the relationship is not under a good star. While Bella is aware that her love has little chance as long as she is a mortal, an accident during Bella's birthday, in which Edward's brother almost loses control of himself, makes the vampire aware that Bella, when she is with him, is in constant danger. And so it comes as it must: Edward pushes Bella away and leaves the city with his family. Bella threatens to break at the apparent end of her great love. But in Jacob (Taylor Lautner) she finds a faithful friend who gives her comfort. But Jacob, too, is surrounded by a dark secret that could become dangerous for Bella. There is also another danger lurking in the woods, someone who has sworn bloody revenge to the Cullens and is after Bella's young life...

Bella Swan (Kristen Stewart) is still deep in the conflict of her feelings. On the one hand, she would like to say "yes" to Edwards (Robert Pattinson) marriage proposal. But not only Edward's reluctance stands in the way of Bella's wish to become a vampire, but also her suppressed feelings towards werewolf Jacob (Taylor Lautner), which she still doesn't really know how to categorize. In addition to this emotional chaos, disastrous news is coming from Seattle about the disappearance of young people, suggesting that someone is breeding an army of young vampires to go to war with the Cullens. And soon it becomes clear who is behind this plan: Victoria (Bryce Dallas Howard), who still has a score to settle with Edward and Bella. The Cullens alone cannot win this battle, so they must form an unusual alliance. But is that alone enough to stand up to Victoria's army?

After the events from "Eclipse" the future for Bella (Kristen Stewart) and Edward (Robert Pattinson) finally looks a bit rosier. After a true dream wedding they spend their honeymoon on a romantic island near Rio. And even if the first time has left clear traces with Bella, the passion for more grows in the freshly baked Mrs. Cullen. Edward, on the other hand, is reserved, as he does not want to hurt his young bride. When Bella finds out that she is pregnant, they realize that it is already too late. But it's not a normal pregnancy. The baby grows up in her belly with incredible speed and robs the expectant mother of every life force. While Edward has to fear for the life of Bellas, the offspring is also a real threat for Jacobs (Taylor Lautner) Clan. Therefore it is decided to kill Bella and the child, which Jacob certainly cannot allow. And so, in the face of a life-threatening birth, there is a relentless battle between vampires and werewolves, in which Jacob has to stand against his own family and on the side of his greatest rival...

After Bella (Kristen Stewart) at the end of the first part of "Breaking Dawn" during the birth of her daughter Renesmee almost died and could only escape the final death, because her husband Edward (Robert Pattinson) finally fulfilled her wish to become a vampire, now nothing stands in the way of a happy family life. But since Bella's father Charlie (Billy Burke) of course can't find out that his daughter is now a vampire, the whole Cullen family has to move out of Forkes. Jacob, who was imprinted on Renesmee and will thus be responsible for her protection throughout her life, cannot allow this to happen. So instead of telling Charlie that Bella died, he tells him the truth. In doing so, he unwittingly sets in motion events that could have catastrophic consequences. Since the Cullens don't have to hide now, Renesmee's existence among the vampires soon becomes known and penetrates up to the Volturi. And they see the rapidly growing child as a real threat that must be destroyed. Of course, the new vampire mama Bella can't let that happen. And so the Cullens gather allied vampires from all over the world around them to prepare for the decisive battle against the Volturi...

Picture + Sound: In the first movies there are still some small weaknesses in the detail sharpness and in the color mixing, which prevent that the otherwise very clean and sharp picture can be called very good. But especially the last three parts are convincing in this respect and don't really leave any reason to complain. The sound is primarily dominated by languishing dialogues and the songs of the soundtrack, but in the few real action sequences the sound pleases with its high dynamics and proper surround effects. Also here the whole thing increases from film to film, whereby the surround effects not only increase in quantity, but also in intensity. Finally, the big final battle offers a real surround fireworks display, where the home cinema is really cracking. Good!

Extras: The complete box has a lot of bonus material to offer> 916 minutes of bonus material. Most of the extras have been taken from the previous individual releases of the films. For each film there is a multi-part making of, extended and distant scenes, music videos, interviews, trailers, various featurettes and some audio comments. But the box also has almost two hours of new bonus material to offer, which fans will certainly be happy about. The core is the new retrospective "The Twilight Saga: From Beginning to End" (approx. 65 min.). Using old and new interviews, footage from the shootings and fan events, the documentary traces the way of the series on the screen and the importance of the films for the makers, actors and fans.

"The Twilight Saga: Bis(s) zum bitteren Ende" (08:23 min.) shows in an amusing way that not everything on the set was always as serious as a beer and that there were always breakdowns, promises and similar goofs. The people to whom the series owes its success are the focus of "The Twilight Saga: From Fan to TwiHard" (ca. 34 min.). Here, not only the makers and stars, but also some passionate fans have their say. A nice documentary, which shows the success of "Twilight" to viewers who can't really explain it, what the books and movies can cause in some people for violent feelings of happiness.

Finally, there is a book club of a special kind on the bonus disc. In "Die Twilight Saga: Stephenie Meyer beantwortet Fragen von A bis(s) Z" (The Twilight Saga: Stephenie Meyer Answers Questions from A to Z) (approx. 33 min.), a TV report from the year 2008, the author sits down with some fans and gives good-humoured answers to all the questions that have been burning under their nails for a long time. Much more bonus material is actually not possible. Very good!

Result: "Twilight" is a phenomenon that hasn't really been revealed to everyone. It is easy to blaspheme about the quite simply structured story or about the film adaptations that are not always fully fledged in terms of quality. But it simply cannot be denied that the novels by Stephenie Meyer, the film adaptations and their actors hit the hearts of the fans and made millions of people happy. And that is actually enough to certify that these works have a right to exist. If you just can't get enough of Bella, Edward & Co., you can now get all the movies in a nice complete box, which especially with two hours of new bonus material offers an additional incentive for fans to buy. For all TwiHards absolutely recommended!