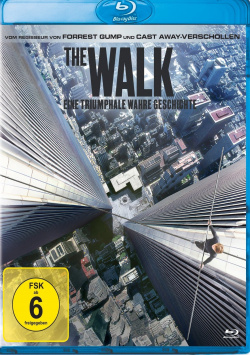 Film: Philippe Petit (Joseph Gordon-Levitt) has always been a rebel and a dreamer. As a street artist in Paris, he can only live out his passion for tightrope acrobatics to a limited extent. Even a spectacular action, in which he illegally balanced between the towers of Notre Dame, did not bring him great fulfilment. For there is a much bigger, more dangerous challenge that he wants to face at the beginning of the 1970s: he wants to stretch a tightrope between the twin towers of the World Trade Center in New York, which are about to be completed, and then run from one tower to the other at a height of 417 meters. With the help of a small group of initiates, the roofs of the towers are scouted out and the materials smuggled into the World Trade Center. But when this actually succeeds after many months of preparation time, it is only the beginning of a spectacular action that will make history…

The true story, the Oscar winners Robert Zemeckis ("Forrest Gump", "Back to the Future") in his latest film "The Walk", has already been covered in the Oscar-winning documentary "Man on Wire". The movie managed to do that in such a gripping and thrilling way that it didn't really take a feature film to tell the same story again. But there is a very special reason to have a look at this version. But more about that now. But first the film should be judged in general.

It seems as if this technique was only made for this movie. Because the really great 3D effects really give the viewer the feeling of balancing across the streets of New York. This is as dizzying as it is spectacular, as sweaty as it is fascinating. What Robert Zemeckis offers his viewers here is pure magic. Exciting like a thriller, yet full of poetry and magic. This makes "The Walk" one of the very few movies that you definitely have to watch in 3D. Far too often the three-dimensional effects are a rather unnecessary gadget. It's pretty to look at, but it's not worth the extra charge on the entrance fee. It's different here. The 3D not only provides wonderful pictures, but also a real cinema experience, which can become a real challenge for spectators who are afraid of heights.

The reason why I didn't go into the great 3D effects right away is a very simple one: although it's especially the last half hour that makes the movie so special and although everyone will probably talk about the 3D effects in the first place, it should also be emphasized that "The Walk" has become a really good and very nice movie overall. A charming and stirring plea to live out one's dreams, however crazy they may be. And that's clearly one thing: Absolutely worth seeing!!!

Picture + sound: The technical implementation of the Blu-Ray is, as expected, on a very high level. The very clean image has a very good overall sharpness and also in the 2D version a pleasant depth, as well as harmoniously mixed black values, which hardly swallow any details even in the numerous darker scenes. Just as much fun as the visual implementation is the sound, which perfectly transports the numerous small and large surround effects into the home cinema. In most moments the dialogues are mixed very powerful and easy to understand. Very good!

Extras: Unfortunately there aren't as many extras here as you would have liked. Besides seven dropped scenes (ca. 5:44 min.) there are three more features about how Joseph Gordon-Levitt prepared for the film (ca. 8:50 min.), about the "supporting columns" (ca. 8:27 min.), as well as about the unbelievable high wire act (ca. 10:48 min.). They are good features, but they should have been more detailed and less promo-heavy. Nevertheless, there is one thing that is clear: Worth seeing!

Fazit: "The Walk" is a real experience, especially in 3D on the big screen. But even in the 2D version on the TV screen, the filming of Philippe Petit's wonderful true story works excellently. The Blu-ray presents the film in first-class picture and sound quality and also has some good, but unfortunately too short extras on board. absolutely recommended!!!