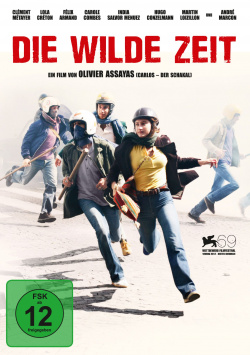 Contents: Paris in the early 1970s. The young student Gilles (Clément Métayer), searching for his place in life, is carried away by the political activism of his fellow students. He is fascinated by the idea of a new social order and takes to the streets with his friends, where he also meets the committed Christine (Lola Créton). When the group is targeted by the police after an action, the students are advised to spend their holidays abroad. For Gilles it is a very special journey, on which he discovers not only his love for Christine, but also his enthusiasm for painting and film. And soon he must decide which path to take for his future: should he follow his talent and his inner passion by turning to art, or should he continue to give preference to his love for Christine and the political commitment of his friends? It is a wild time that shows him how many possibilities life offers him to find his own place...

With "Die wilde Zeit" director Olivier Assayas delivers another very harmonious document of his time. Already in his great "Carlos - The Jackal" he succeeded in capturing the social and political mood of an entire generation by telling the story of a character. And that's exactly what he succeeds in doing again, by sending his protagonist Gilles on a search for his life's goal. He is torn by the events that are happening around him. On his journey to himself, the viewer learns not only a lot about the political situation in Europe in the 70s or about the art scene. Social views about relationships, sexuality or self-determination are also conveyed very well here.

This, of course, is not only possible through the good script. The atmospheric equipment, costumes, hairstyles and soundtrack also ensure that the audience is transported directly to the 1970s. As successful as most aspects of the staging are, it must also be said that the whole thing can appear somewhat dry and lengthy, especially in the long dialogue scenes in which political activism or the understanding of art is at stake. In moments like this, in which the story of Gilles isn't the center of attention, the movie still works very well. Nevertheless, there is always the feeling that such scenes were only staged for their own sake and that they don't really advance the actual story. Other moments, on the other hand, which deserve a little more attention, are ticked off in passing and can't unfold the emotional effect for which they would have had the potential.

However, fortunately these are only really few moments. All in all, "Die wilde Zeit" has become an exciting and beautiful journey through time, a film full of longing and melancholy, whose story perfectly masters the difficult balancing act between universality and intimacy. For lovers of somewhat more sophisticated, contemporary Arthaus dramas, the following also applies: Absolutely worth seeing!

Picture + sound: The colour scheme of the DVD captures the harmonious 70s atmosphere of the film very well. But the visual implementation is also convincing in terms of image sharpness and contrasts. In some darker scenes there is minimal noise and also the detail display has to accept some quality losses, but overall a very positive overall impression prevails. This also applies to the sound, which is dominated primarily by dialogues and music, but which can also create a harmonious sound backdrop through the targeted use of surround channels. Good!

Extras: As a bonus the DVD has a short, but not uninteresting Making of (about 16 min.), as well as a very psychedelic light show for "Fille qui Mousse" (about 2:20 min.), which was shown in the movie for a short time.

Conclusion: With "Die wilde Zeit" director Olivier Assayas succeeds excellently in taking the audience back to the early 1970s and making all the cultural and political features of this time tangible. It is a film full of longing and melancholy, which has become very universal on the one hand, and absolutely intimate on the other. A worth seeing piece of contemporary history, which is presented on the DVD in good picture and sound quality. The additional material is quite scarce with a short making of, but it is definitely worth seeing. Altogether there is a very clear one for this DVD: Recommended!