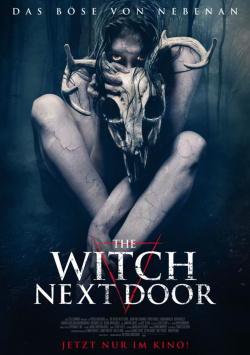 The Witch Next Door

Teenager Ben (John-Paul Howard) is not at all enthusiastic about spending the summer with his father Liam (Jamison Jones) in a small coastal town. That he finds a girlfriend with Mallory (Piper Curda) right after his arrival makes the situation a bit easier. Nonetheless, the holidays will still turn into a real horror summer. Because after some unusual events Ben is convinced that Abbie (Zarah Mahler), the mother of the neighboring family, is a witch. But even Mallory wants to believe him. All by himself Ben now tries to find out the truth and thus attracts Abbie's attention - and this could have terrible consequences not only for him.

Even before: "The Witch Next Door" is guaranteed not to win any big movie awards. The script isn't exactly an outgrowth of originality and also from an acting point of view there are some obvious weak points to be found here and there. Having said that, it has to be pointed out: The movie is damned entertaining and despite a reasonable budget it is really well directed. Drew and Ben Pierce not only present their audience with some good effects, which look pleasantly handmade. They also create an atmosphere that brings back memories of some horror hits of the eighties.

Besides the cult movie "Fright Night", from which some plot elements were obviously taken, there are also elements from works like "Lost Boys" used in this entertaining witchcraft. And whoever has seen Steven Spielberg's "Jaws" several times, as I have, will surely also be of the opinion that one scene is not by pure coincidence almost identical in its editing, like a sequence from the mother of all monster shark movies. "The Witch Next Door" seems to be infused with a certain nostalgia, without seeming old-fashioned. The two brothers really did a good job of that.

The resolution actually brings a little surprise, before it comes to an unfortunately somewhat conventional showdown. But even if the finale is a little bit disappointing, the positive overall impression outweighs in the end. As a fan especially of 80s cinema I was well entertained by "The Witch Next Door". But also fans of contemporary horror will be well served, if they expect a little rough splatter food or a sophisticated arthouse horror in the style of "The Witch". A very clear case of: worth seeing!