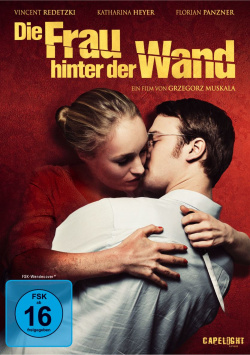 The Woman Behind the Wall - DVD

Film: Martin (Vincent Redetzki) moves from the provinces to Berlin for his studies. He quickly realizes that the clocks tick a little differently here than in his small-town home and that it is almost impossible to find an affordable apartment here. And so he gladly accepts the offer to move into a somewhat run-down apartment whose previous tenant has disappeared without a trace - even if he has to have the application photo taken without a shirt by the somewhat strange caretaker (Ronald Nitschke) of the dark tenement house. The chaos left behind by the previous tenant doesn't bother him any more than the clogged bathtub or strange noises he hears through the wall. When he gets to know his landlady and neighbour Simone (Katharina Heyer), he is immediately fascinated by the sexual appeal of the attractive and mysterious charisma. When he realizes that something is wrong in the house and that he may be in danger himself, he has long since been caught in a web of sex, passion and dark secrets from which there seems to be no escaping...

"The Woman Behind the Wall" is a very good example of how exciting and original genre cinema from Germany can look. Staged for the series "Das kleine Fernsehspiel", Grzegorz Muskalas erotic mystery thriller already has a cinematic level on a purely visual level. Here we play very cleverly with shadows and colours, but also with the equipment, so that a very special atmosphere is created, which is difficult to escape. The visual language, for example, repeatedly recalls Polanski's "The Tenant" or the surreal cinema of David Lynch. That alone is enough to make the film stand out from the mass of German television productions.

But the film can also be convincing dramatically. Muskalas deliberately avoids all too striking effects and relies more on a subtle tension, which clings to the viewer more and more and doesn't let go until the finale despite some small lengths. Especially at the beginning, there is a real Hitchcock flair here. Admittedly, the level of this "Master of Suspense" does not reach "The Woman Behind the Wall". But as a thriller in best Hitchcock style the movie works very well. Apart from the haunting atmosphere, this is also due to the good actors. Vincent Redetzki is a shy student on the verge of total obsession and just as good as Katharine Heyer as a mysterious femme fatale.

Who appreciates exciting, dark thrillers with a pinch of eroticism, lots of mystery and suspense should not miss this successful feature film debut by Grzegorz Muskalas. Perhaps not a perfect film, but an excellent example of how creative, unadapted and surprising the young German film can be. And for that alone there is a clear one: Worth seeing!

Picture + sound: The mysterious, dark mood that dominates the film right from the start is shown to advantage on the DVD. This is not only ensured by the very atmospheric colouring, but also by the harmonious contrasts and the convincingly mixed black values. In terms of image sharpness, the DVD is also convincing, whereby there are visible weaknesses in the detail display, especially in the many dark scenes. The sound is rather reserved, whereby there are small, but very effective surround moments in addition to the well mixed dialogues. Good!

Extras: In addition to three distant scenes (approx. 3:34 min.), which can optionally be viewed with a commentary by the director, the DVD also includes Muskala's very worth seeing short film "Die Frau hinter der Wand" (approx. 19:11 min.) in the bonus offer. Gut!

Fazit: "The Woman Behind the Wall" is an exciting and electrifying thriller that scores with an atmospheric visual language, an erotically charged atmosphere and some original plot elements. A movie that dares to leave the certain schema F and to surprise the viewer from time to time. The DVD presents the film in harmonious picture and sound quality and as an extra has a worth seeing short film of the director to offer. If you like exciting chamber plays of a more unusual kind, you should definitely take a look here. Recommended!