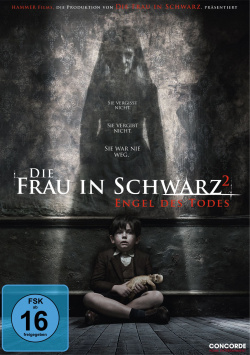 Contents: Actually, the old Eel Marsh house on a remote island near the village of Crythin Gifford should offer a group of schoolchildren a new, safe home. Together with the young teacher Eve Parkins (Phoebe Fox) and the director Jean Hogg (Helen McCrory), the eight children fled London from the German bombing raids. On the island they want to endure the horrors of the Second World War before returning to their families. But in the old house the unspeakable evil in the form of the woman in black is up to no good. And this evil force, which drove the young lawyer Arthur Kipps to his death years ago, will do everything it can to ensure that the new inhabitants of her house do not leave the island alive...

The horror thriller "The Woman in Black" marked not only one of Daniel Radcliffe's first attempts in 2012 to detach himself from his Harry Potter image, but also the rebirth of the legendary Hammer Studios. The film not only got respectable reviews, but was also a great success at the box office. No wonder, then, that a sequel was not long in coming. Directed by TV director Tom Harper ("Peaky Blinders"), "Die Frau in Schwarz 2 - Engel des Todes" was again written after the story of Susan Hill. The story takes place a few decades after the events in Part 1, so there are no connecting elements between the two films except for the woman in black who gave the title. This has the advantage that you can follow the admittedly simple story even if you don't know its predecessor.

The reason why the first movie worked so well is that it made use of many classic creepy effects. Although there were some only partially effective computer effects, most of the time the game dominated with very original fears and the dark basic atmosphere. In the second movie this doesn't work so well anymore. Here too, the locations and equipment create an atmospheric goose bump atmosphere. And especially at the beginning there are also some good moments of tension. However, these are increasingly watered down and at some point degenerate into a tame copy of the really good shock moments of the first part. Unfortunately, real suspense only rarely arises there.

It is to be highly credited to the makers that they at least tried to tell a new story. However, good intentions aren't enough to make a good movie. An unripe script, too little tension and lukewarm creepy effects make sure that the movie isn't more than a nice, but also very conventional ghost story with a few highlights. If you like classic ghost stories, don't expect any originality and just want to get a little creepy, you could still have some fun here despite all the weaknesses. All in all there is only one: worth seeing with some exceptions!

Picture + Sound: The technical realization of the film is very atmospheric. Even though there are some minor weaknesses in the detail representation and minimal picture noise to be discovered in the darker scenes, the color scheme and the harmonious contrast mix capture the dark and tense mood of the story very well. The targeted sound effects underline this impression. They provide pleasant dynamics on the surround channels in an otherwise rather reserved sound mix. All in all there is an absolutely deserved one for it: Gut!

Fazit: "Die Frau in Schwarz 2 - Engel des Todes" unfortunately no longer has the high tension and creep factor of the first part. There are again some very successful goose bumps moments and an atmospheric basic atmosphere. However, the rather weak story and some not very well done computer effects make sure that the movie is never more than a nice, but also very conventional ghost story. The DVD presents the film in appealing picture and sound quality. The extras are clearly arranged, but at least the short documentary about the locations and the making of are well worth seeing! If you liked the first part and don't expect too much, you can take a look here!