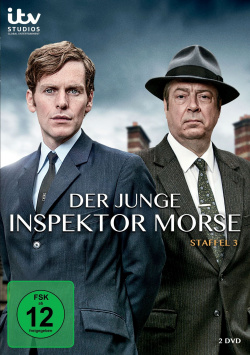 Movie: From 1987 to 2000, John Thaw solved exciting Morse cases in seven seasons and some specials as Inspector Endeavour before the series "Inspector Morse" was discontinued. Six years later his faithful assistant DCI Robert Lewis got his own series "Lewis - The Oxford Thriller", which ran just as successfully for nine years. In addition to this spin-off, another Morse offshoot came on TV in 2012: the prequel series "The Young Inspector Morse", which accompanies the young policeman during his early investigations in the 1960s.

It is rather the exception that an offshoot is at least as good as the original. But the series written by screenwriter Russell Lewis is British thriller entertainment at the highest level and thus easily stepped out of the big shadow of the two previous series. Not only in Great Britain is the young Endeavour Morse a quota guarantor. Also in Germany, where the original series is known only to a small fan community, the Prequel enjoys great popularity. Great actors, atmospherically densely staged cases and charming reminiscences of great film classics also make the third season extremely worth seeing again.

The cards seem to be shuffled again after the end of the second season. Endeavour Morse is no longer in prison, but he is no longer a policeman. Though it doesn't take long for his investigative skills to be reassessed, there is a shadow on the relationship between him and Thursday after the events that almost cost his superiors and mentor their lives. But at the end of the day, Morse is a true professional even at a young age, who solves even the trickiest cases with a great nose and talent for combination. Exciting, entertaining, great played and really great staged - this is "The young inspector Morse".

And that's what the new episodes of the third season are about:

Morse is at large again. The charge against him for killing Police Commissioner Standish was dropped, but he is still suspended from duty. The body of the young conductor Jeannie Hearne is found in a forest. Thursday - freshly recovered from his gunshot wound - investigated in the case. He tracks down the submerged Morse and tries to persuade him to come back to the police. Meanwhile, Morse receives an invitation to a dissipated party by millionaire Joss Bixby. At the party he meets the tennis player Elva Piper again, whom he met shortly before through his old friend Tony Donn. Tony has been harboring Morse in his forest cabin since he was released from prison. Jeannie Hearne was murdered in the same forest. (Text: ZDF)

The young artist Simon Hallward is killed by a fire in his apartment. Morse finds out it's not an accident, it's murder. During the investigation he is supported by the beautiful and clever policewoman Shirley Trewlove. At the same time, in front of a supermarket, there is a demonstration against the sale of a food manufacturer that produces sugar under questionable conditions. Then poisoned food appears in the supermarket, with which the owner Leo Richardson is to be blackmailed. When a customer dies from this poisoned food, Thursday and Morse look for the murderous blackmailer. The Hallward case also appears to be linked to the supermarket's poisoned foods. (Text: ZDF)

After evening school, a girl disappears. Thursday sees a connection to an old case in which a young woman was attacked and sexually coerced and has been in a coma ever since. The way home of both women was almost identical. The missing girl is Ingrid Hjort from Denmark, who worked as an au-pair in the family of Dr. Hector Lorenz. His wife died two years ago. Ingrid and Dr. Lorenz had a secret affair for some time. A short time later, the young Ricky Parker is also reported missing. It's suspected he drowned in a lake. But in the lake you can only find his arm. Meanwhile, Morse is worried about Thursday, whose health is deteriorating. (Text: ZDF)

The owner of a clothing factory is shot in front of a bank. A lead leads Fred Thursday to the Matthew brothers and thus to Oxford's gangster milieu. The Matthew brothers are the successors of the recently deceased gangster boss Harry Rose. Fred Thursday is willing to put a stop to Oxford's underworld once and for all - whatever the cost. However, Endeavour Morse has his problems with this attitude and clashes with Thursday. His worrying cough is getting worse. At the same time, Morse meets Felix Lorimer, his former university tutor, who asks him for a private favor. Morse is to gather information about the new lover of his soon-to-be ex-wife. (Text: ZDF)

Picture + Sound: Sharpness, coloration and contrast adjustment are on a good TV level in the brighter scenes, only in darker moments there are smaller blurs and slight picture noise every now and then. The stereo sound is absolutely convincing with the well mixed dialogues and the matching music. Good!

Extras: As an extra on the second DVD there are five interviews with the actors (about 16:07 min.) about their roles and about the events in the new episodes after the dramatic finale of the second season.

Result: "Inspector Morse", the predecessor of "Lewis - The Oxford Thriller", has got a really great prequel with "The Young Inspector Morse". Timelessly good thrillers in an atmospheric sixties atmosphere are the secret recipe for this British quota success, which is now also allowed to enter the third round in Germany. After the dramatic events of the finale of the second season a lot has changed of course - the high quality of the individual episodes has remained. The four episodes in feature length are available on two DVDs in good picture and sound quality. As a bonus, there are a few interviews. For fans of britischer Krimikost par excellence absolutely recommendable!