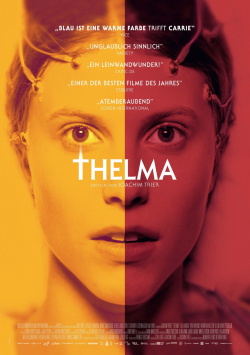 The young Thelma (Eili Harboe) grew up in a strictly religious home in the country. For her studies she moved to Oslo, where a completely new world revealed itself to her. Although she cannot completely escape her parents' control by their constant calls, Thelma experiences something like freedom, light-heartedness and happiness for the first time here - a feeling that intensifies even more when she meets Anja (Kaya Wilkins) and falls in love for the first time. But the feeling of happiness is not permanent, because Thelma is more and more often afflicted by violent seizures, which even specialists cannot explain to themselves. But the young woman suspects what the seizures are all about - because Thelma has very special abilities that have long been suppressed. Abilities with which she has taken on a heavy guilt and which now break out again uncontrollably. And this time they could be Anja's undoing…

With "Thelma" Joachim Trier has staged a very atmospheric mystery drama that has some very gripping moments to offer, especially on a visual level. Thematically, Trier very obviously makes use of Stephen King's "Carrie". Here, too, the awakening of one's own sexuality is associated with the strengthening of psychic powers. And also the attempt to suppress these forces through religiosity is common to both works. However, Trier approaches the subject a lot more reserved and also a bit more subtle than King in his horror classic. The parallels are nevertheless unmistakable.

The big difference is to be found in the consequences that these psychic abilities have. What Trier and his co-author Eskil Vogt came up with here is very original and very disturbing in one sequence. However, this scene is necessary to fully understand the behavior of Thelmas parents. Their dilemma is the most interesting aspect of the story, because every viewer will inevitably ask himself the question: How would I act? It is also exciting to think about what guilt the parents have brought upon themselves or to what extent Thelma can be held responsible for what has happened in their past, but also in the present.

"Thelma" does not only offer enormous tension in a very unagitated, quiet way, but also aspects you can think about for a long time. And so, despite many similarities to other works like "Carrie", this film can be seen as a real enrichment for the mystery genre. Absolutely worth seeing for all those who appreciate subtle thrills!