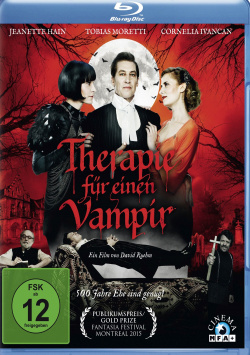 Therapy for a vampire - Blu-ray

Film: Vienna, early 1930s: Dr. Sigmund Freud (Karl Fischer) is a little surprised about his newest patient, the mysterious Count Geza von Közsnöm (Tobias Moretti). But even if the pale gentleman seems a little strange, he still has quite normal problems: he can't stand his wife Elsa (Jeanette Hain) anymore and longs for his only true love. He recognizes this in a painting by the psychoanalyst that shows Lucy (Cornelia Ivancan), the friend of the painter Viktor (Dominic Oley). The count is convinced that she is the reincarnation of his true love. And so he tries everything to win Lucy over. It's just too bad that the Countess doesn't like it at all and takes a swing to counterattack. That would be already with completely normal humans a rather unpleasant situation. But since the von Köznöms are vampires, a bloody marital quarrel is inevitable…

With "Therapy for a Vampire" David Rühm tries his hand at the difficult genre of horror comedy. After a longer creative break as a director, the Austrian has not forgotten his craft. The marital quarrel with fangs is carried out quickly and humorously and has some really amusing ideas to offer. With a slightly trashy look that is sometimes even reminiscent of the vampire classics of the silent movie era, the work also has a very special visual touch to offer. However, the script lacks - forgive me for this cheap word game - enough bite to combine these good aspects into a thoroughly successful pleasure.

The word joke doesn't work at all in some moments. And just Lucy and Viktor are amazingly bloodless drawn. The obvious joy of playing of the actors can still tear out a lot. But especially in the more quiet moments these script weaknesses become more than noticeable. Moreover, the movie also lacks that certain something visually that makes the viewer feel that he really belongs on the big screen. The staging has a clear TV film character overall. And that can simply seem a bit "cheap" in cinema.

No question, "Therapy for a Vampire" is amusing and especially the storyline with David Bennent ("The Tin Drum") is very original and funny. Nevertheless, the staging lacks some corners and edges to make the whole thing from nice entertainment to big fun with cult character. If it's enough for you to laugh a few times and "just" smile amusedly, you'll still have enough fun here to justify buying the disc. But if you hope for a wonderful weird creepy fun, you might be disappointed. Therefore, the following applies: with some exceptions, definitely worth seeing!

picture + sound: The film has its own, intentionally artificial-looking colour scheme, whose fairytale-like character is shown to advantage on the Blu-ray. Otherwise, the picture pleases with a pleasant sharpness of detail and well balanced contrasts. The overall tone is rather reserved, but in some moments it can also unfold an atmospheric dynamic with powerful sound effects. Good!

Extras: Beside the trailer and further program tips of the provider there is a somewhat short, but definitely worth seeing Making of (approx. 12:33 min.), as well as some uncommented shots from the shooting (approx. 5:58 min.) to see. Not much, but good!

Fazit: "Therapy for a vampire" is amusing, in some aspects very original and visually extremely appealing implemented. Even though some moments lack a little bit of bite and the story, which is at first gorgeous, could have been a bit more rough and edgy, the movie still offers good and pleasantly weird entertainment. The Blu-ray presents the whole thing in convincing picture and sound quality. The bonus material is manageable, but well worth seeing. All in all this is enough for a clear: Recommended!