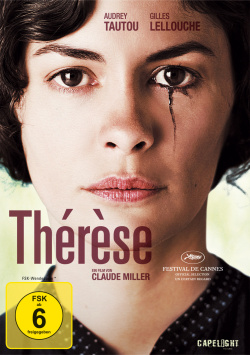 Film: Southern France, late 1920s: the unadapted Thérèse (Audrey Tautou) marries Bernard Desqueyroux (Gilles Lellouche), the brother of her best friend Ann (Anaïs Demoustier). Through marriage, the possessions of both families coincide, which seems to secure their prosperity in the long run. Thérèse only feels true love for her forests. Otherwise she always prefers rationality and rarely lets herself be guided by her feelings. Ann's very different. She believes in the great romantic love she believes to have found in the Jew Jean (Stanley Weber). But for him Ann is only a pleasant pastime. He enjoys his freedom and his freedom - a longing that is becoming stronger and stronger in Thérèse as well. To escape the shackles of her marriage at Bernard's side, she decides to take drastic measures. But fate cannot be changed so easily...

"Thérèse" is already the second adaptation of the novel "Thérèse Desqueyroux" by Nobel Prize winner François Mauriac after Georges Franjas' 1962 film "Die Tat der Therese D.". The very well supported adaptation of the novel is the legacy of director Claude Miller ("A Secret") who died in April 2012 shortly before the premiere of the film at the Cannes Film Festival. His last work is a very well played, calmly and sensitively narrated drama, which lives especially from his wonderful pictures. Shot in parts of Bordeaux, the writer's homeland, and along the Gironde River in southwestern France, the landscape shots, in conjunction with the authentic-looking decor, are a real feast for the eyes.

However, sometimes the staging is a little bulky and the characters difficult to access. The fact that the story is told very cautiously and that the actors' play also corresponds to it means that the motifs for Thérèse's action are not evident to the extent that would have been necessary to be able to really show sympathy and understanding for it. If you don't know the original novel, you have to look under its surface while watching the movie in order not to feel lost somehow. And not all viewers should be able to do that.

Beyond that, "Thérèse" is a really successful and stirring drama, which is supported by a strong Audrey Tautou and an even stronger visual language. It's not a light feel-good film, but a sometimes quite dark material. Nevertheless, Miller manages to skilfully avoid that the viewer is overwhelmed by the seriousness of the story and its emotions and at the end there is a kind of releasing feeling of happiness. For friends of the demanding French Arthaus drama, Claude Miller's last film, despite its shorter lengths and dramaturgical weaknesses, is also absolutely worth seeing!

Picture + Sound: The picture on the DVD is very clean, the powerful colours reflect the atmosphere of the picturesque landscape very well. The picture sharpness is on a good to very good level, whereby the good level can be maintained also in the darker scenes to a large extent. The sound is, as in this genre, not uncommon, very reserved, whereby the dialogues and the calm film music determine the tonal events in most moments. Good!

Extras: As a bonus the DVD has a short look behind the scenes (approx. 8 min.), as well as the trailer to the film to offer. Somewhat lean.

Fazit: "Thérèse" is a successful adaptation of the novel by François Mauriac. The last film by director Claude Miller, who died in 2012, pleases with its captivating visual language, good actors and an unagitated yet somehow stirring production. The DVD is technically well done, only the bonus material is a bit meager. Nevertheless, a clear recommendation can be made for lovers of sophisticated French arthouse dramas. Worth seeing