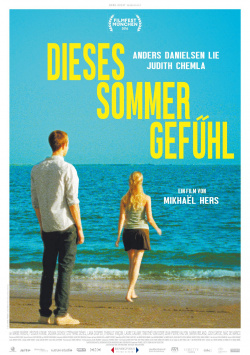 Lawrence (Anders Danielsen Lie) and his girlfriend Sasha (Stéphanie Déhel) live happily together in Berlin. They don't know the worries. They live together into the day, unaware that each of them could be their last. But then one day Sasha simply collapses and dies a short time later in hospital. The young woman just isn't there anymore, but for Lawrence, as well as for Sasha's family, life has to go on somehow. A year later, Lawrence visits Sasha's sister Zoé (Judith Chemila) in Paris, and it quickly becomes clear that both of them have not yet dealt with the loss. The idyll that Zoe finds during a visit to her parents' house in Anecy also turns out to be a pure facade. Only one more year later, when Zoe visits Lawrence in New York, life seems to have finally become a little easier and the grief has the normal everyday life no longer under control. But perhaps appearances still deceive now?

"This summer feeling" deals in a very calm way with the topic of coping with mourning. Director Mikhaël Hers shows in an episodic manner how the unexpected death of a loved one changes the lives of the bereaved and how they gradually try to find their way back into everyday life. Because even if it sounds hackneyed, life goes on. It hurts and something is missing - but it will always go on somehow. The atmosphere Hers can create at the very different venues reflects that feeling very well. But it also makes the film a very difficult affair.

Because not much really happens. The viewer can take a quick look at snapshots of the characters you get to know under unpleasant circumstances. It's quite possible to build something like an emotional bond to Lawrence and Zoe. This becomes clear in the last act, which takes place in New York. Here melancholy mixes with the hope of a new beginning, sadness with the desire for love and life. And that also carries over to the audience. Nevertheless, it's also a bit exhausting to follow the long scenes of apparent irrelevance and always pay them the full attention. Certainly, it becomes clear why the director does not use a cinematic dramaturgy in the classical sense. But watching the characters walking around somewhere, talking about everyday things or just looking sad is a little trial of patience at a running time of almost two hours.

Nevertheless: What the film wants to convey, it brings across very authentically and powerfully. So anyone who wants to see a very true-to-life drama about loss, grief and letting go and is willing to face the somewhat bulky staging can warmly recommend "This Summer Feeling". Worth seeing!