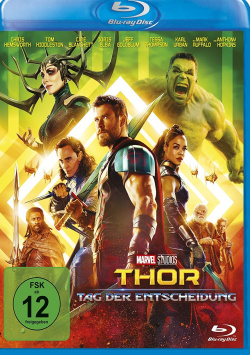 Thor: Day of the decision - Blu-ray

Film: Thundergott Thor (Chris Hemsworth) has a problem: The death of his father Odin (Anthony Hopkins) freed his first-born Hela (Cate Blanchett), goddess of death, from her prison. Now she sees herself not only as a legitimate heir to the throne, but also strives to subjugate the entire universe. Thror must, of course, prevent that. But when he tries to get to Asgard before Hela, he lands on the planet Sakaar. On this inhospitable garbage planet he not only meets his half brother Loki (Tom Hiddleston) again. He is also thrown into the Gladiator Arena by the Grandmaster (Jeff Goldblum), the ruler of Sakaar, to face the most powerful of all fighters. He's an old acquaintance, though: Hulk!

Probably inspired by the great success of the "Guardians of the Galaxy" movies, Thor is now allowed to be more colorful and funny in his third solo adventure than his two predecessors. "Thor: Day of Decision" entertains with wonderful dialogues and wonderfully bizarre ideas, which the New Zealander Taika Waititi ("5 room kitchen coffin") has implemented with refreshing ease. The fact that the whole thing also works well in the more action-packed and serious moments, however, proves that the studio proved a very good hand in choosing the director. But it is not only Waititi that has ensured that this has become Thor's best cinema appearance to date.

The actors also contribute considerably to this. Chris Hemsworth is a self-mocking, self-mockery enthusiast, while Cate Blanchett, the diabolical goddess of death, is a joy to play, making Hela one of the best opponents in the Marvel universe to date. Watching her conjure up Ragnarök - the Twilight of the Gods - is simply great fun. And then, of course, there is the wonderfully weird Jeff Goldblum, the unbeatable Mark Ruffalo as Bruce Banner and Tom Hiddleston, who has become the secret star of Thor movies. This already good ensemble is supported by newcomer Tessa Thompson, who fits much better to Thor's side than Natalie Portman, as well as by Idris Elba, whose performance is short, but more important, than in the previous movies.

Addicted, there's not really much new in the movie. The effects are first class, the tempo rapid and the action thrilling. But the only really big surprise are the amusing guest appearances, which of course should not be revealed here. Nevertheless, even if the story lacks originality, it is not its implementation. "Thor: Day of Decision" does justice to the genre of comic-strip filming in every respect. The film is a colourful adventure that takes itself just seriously enough not to degenerate into a flat laughing stock. Taika Waititi has staged a great cinematic fun, which has given his hero an extra scoop of coolness by dealing with the genre with a wink of the eye. And Hulk's never been so great at the movies as he is here. Even though his solo films have not been convincing so far, he is unbeatable as a sidekick in the truest sense of the word.

Who likes the Marvel Cinema universe and appreciates the humor of the "Guardians" will love "Thor: Day of Decision" guaranteed. That's what it's all about: Absolutely worth seeing!

image + sound: The Blu-Ray's image is absolutely clean and has a very good overall sharpness, which also brings out smaller details well in dark scenes. The colour scheme is extremely powerful, as it underlines the gaudy look of the film very well. The Dolby Digital Plus 7.1 provides a lot of movement on the surround channels, especially for action-heavy scenes such as the arena battle, but at the same time transports the dialogues out of the speakers in a way that is easy to understand. Very good.

Extras: The bonus material starts with an extremely amusing audio commentary by director Taika Waititi. The filmmaker uses the first minutes mainly for wonderful jokes, before he later also has to tell many amusing and interesting anecdotes. It continues with a series of featurettes that together make up a 34-minute making of. This entertaining documentary is about the director, the Korg he embodies, Hela and Walküre, Sakaar and a journey into the mysteries of comics. In addition to the usual promo praises, there is also a lot of interesting stuff to learn here - and in an extremely entertaining way.

A few mishaps from the shoot (approx. 2:18 min.), as well as the weird short film Team Darryl (approx. 6:08 min.) are also still on offer. A short review of 10 years of Marvel Studios movies (ca. 5:23 min.) follows, followed by some additional or extended scenes with not quite finished effects (ca. 7 min.). Two sequences in 8 bit retro look, as well as a short intro by the director to the main film round off the good additional offer.

Fazit: "Thor: Day of the Decision" is exactly how a good comic movie should be: Colourful, fun and action-packed. The fact that the film takes itself far less seriously than its two predecessors does this third solo appearance of Thor a lot good! The Blu-ray presents the fantasy spectacle in very good picture and sound quality and also has some entertaining extras on board. All this results in a clear bottom line: Absolutely recommendable!