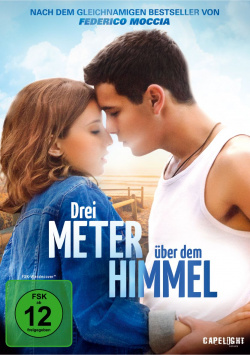 Contents: After being fined for grievous bodily harm, this is the last chance for the fiery Bad Boy Hugo (Mario Casas) to avoid going to jail. But Hugo doesn't even think about going for good boys now, especially not when he meets Babi (María Valverde), a girl from a good family. Because a luxury girl like Babi can only be impressed in his eyes with rude behavior and illegal motorcycle racing. Although Babi is not very enthusiastic at first, Hugos Masche works. And soon the two are a couple, although they come from completely different worlds. But Hugo carries a secret with him that weighs heavily on his soul and increases his aggression day by day. And soon this threatens to destroy not only his future, but also his relationship with Babi...

"Three meters above the sky" is the film version of the bestseller of the same name by Frederico Moccia, which also met with a very positive response in Germany. The film adaptation by director Fernando González Molina is clearly aimed at a target audience of teenage girls. Therefore, some of the criticisms should not be overly negative. Because when the teenage hormones really go crazy at the sight of Hugo's naked upper body, the audience doesn't care if the story is especially original or the dialogues are extremely profound.

The fact that this is a very classic love story, which has already been told a thousand times in very similar variations, isn't really the movie's actual flaw. Because in the successful moments this variation of the often tried dramaturgy works very well. But some clichés are so exaggerated that they almost take on questionable proportions. That the Bad Boy actually has a very big heart and a very vulnerable soul and therefore is also the big romantic hero, while the "nice" boys are all bourgeois bores or cowardly mother's sons, is unfortunately always the case with such stories. But that the devastation of foreign houses, damage to cars and grievous bodily harm are very easily excused ("He has real problems - He doesn't get a cent from his father") or that the girls become weak here when the boys steal money from their wallets before their eyes or treat them disrespectfully and condescendingly ("He is so hot") is a little annoying. There's no excuse for that either for the secret Hugo's carrying around. The summit is then the scene in which Hugo reacts to Babi betraying him to the police with the extremely arrogant statement that he had made her so crazy about him until the day he would stand trial that she would do anything to save him from jail. I'll probably never know why a girl gets weak there.

While María Valverde, as a well-protected model student who suddenly discovers a whole new side to herself through her feelings of Hugo, plays quite convincingly, Mario Casas simply puts on too much weight in many scenes. His bad-boy behaviour is so strikingly depicted that it almost seems unintentionally funny. Girls might think that's cute. However, it's really negative in that it completely distracts from the actually very good sides of the story in many scenes. It would have been important to also make Hugo's good, likeable side more apparent to all viewers and not to portray him as an arrogant lubricating bolt in order to achieve the emotional effect the last act would have deserved in the end.

As I said, these are all points that the target group should be bothered about, but will not do so. And so, despite all the criticism, it is guaranteed that in the end some tears will roll and the anticipation of the sequel "I like you" will increase immensely. Whoever wants to see a sensitively staged love drama is definitely wrong here. But if you don't mind blatant clichés and a very conventional dramaturgy, this pretty filmed and neatly played teen romance will certainly get your (her) money's worth. And in this case the following also applies: Worth seeing!

Picture + sound: Since there was only one stream available for the test, unfortunately no rating can be given for the picture and sound quality at this point.

Extras: Also the bonus material could unfortunately not be viewed. A Making of, a music video, a preview of the sequel "Ich steh auf Dich" and the trailer for the film are announced.

Result: "Three meters above the sky" is a romantic teen drama that was so successful in the Spanish cinema in 2010 that it was continued two years later. The dramaturgy and the characters are overdrawn and seem very one-dimensional. But for girls who love "Twilight"-romanticism and like to ignore all clichés and questionably drawn pictures of women when looking at naked muscular boys' upper bodies, this is a nice romance with some nice goose bumps. By contrast, viewers over the age of 18 will hardly be able to make friends with this bestselling film adaptation. Nevertheless, the bottom line for the target group is clear: Recommended!